Here is a leaked picture supposedly taken from a Nike warehouse showing the Arsenal, FC Barcelona and Manchester United home kits for the 2012/2013 season. 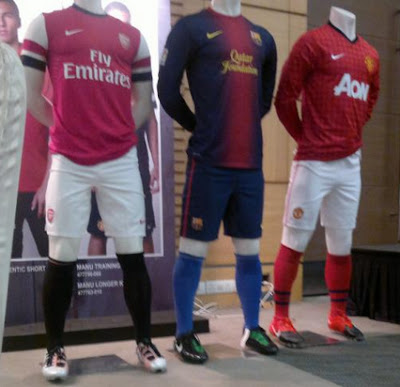 This is the picture supposedly leaked from a Nike warehouse of Arsenal, Barcelona and Manchester United’s home kits for the 2012/13 season. The image has been all over Twitter recently and sites such as the Metro have also picked it up, while Arsenal Insider ran an exclusive last week showing an Arsenal kit very similar to the one shown here.

Of course these kits are still unconfirmed but as seems to be the way these days, pictures get leaked weeks in advance and it’s rarely a shock when the clubs do officially reveal the new kits. Opinions have so far been generally negative on the kits which often bring forth a number of critical fans each year.

What do you think? Please leave your opinion in the comments section below…

Thanks to DBSfootball for submitting this guest blog post.