Chelsea are in the north east to take on Middlesbrough at the Riverside Stadium on Wednesday night in the fifth round of the FA Cup. Here’s a preview for the game

Chelsea are in the north east to take on Middlesbrough at the Riverside Stadium on Wednesday night in the fifth round of the FA Cup.

The holders preparations for the game have been overshadowed by reports of a training ground bust-up between interim boss Rafa Benitez and captain John Terry following Sunday’s 2-0 loss to Manchester City. Benitez has played down the speculation but it has done nothing to improve relations between him and the Blues players and fans.

Chelsea are on a poor run of late with just one win in four league games that has seen then drop down to fourth in the table with fifth-placed Arsenal now breathing down their necks.

However, the west Londoners have a formidable FA Cup record in recent years that has seen them lift the trophy four times in just six seasons, so the Premier League giants should be confident of seeing off Middlesbrough and booking a trip to face Manchester United at Old Trafford in the quarter finals.

Chelsea will welcome John Terry back to the starting line-up with the skipper set to replace Gary Cahill – who has been ruled out with a virus. Terry is likely to play alongside David Luiz at the back with Branislav Ivanovic moving to right back to cover for Cesar Azpilicueta who is out with a leg injury.

Benitez has hinted he will rotate his squad which means the likes of Ryan Bertrand, Marko Marin and Victor Moses could start, while Fernando Torres is also likely to play up front ahead of Demba Ba.

Middlesbrough will be without the services of on-loan Chelsea midfielder Josh McEacharan, who is ineligible to play against his parent club tonight. Boss Tony Mowbray has a number of injury worries to contend with, with Jonathan Woodgate, Stuart Parnaby, Justin Hoyte, Lukas Jutkiewicz and Julio Arca all sidelined. Sammy Ameobi and Kieron Dyer are also both cup-tied. 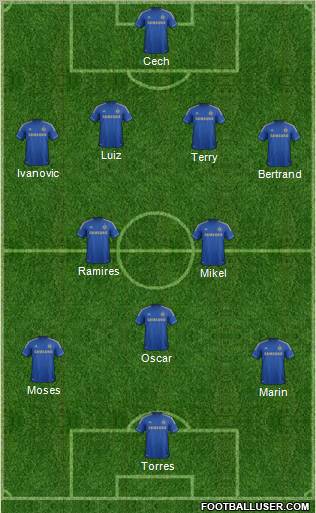 Boro are in poor form having won only once in their past nine games while Chelsea have won seven and lost none of their last nine away games in the FA Cup.  Therefore, I can’t see past a Chelsea win tonight and back them to secure a trip to Old Trafford to face United in the next round. Middlesbrough 0-2 Chelsea.

What would be your Chelsea line-up and what’s your predicted score for the game? Get involved in the comments section below.