Chelsea take on Liverpool at Anfield on Sunday. Chelsea blogger ‘The Chelsea FC’ previews the big game including team news and a score prediction for the match.

Chelsea take on Liverpool at Anfield on Sunday afternoon and here Chelsea blogger ‘The Chelsea FC’ previews the big game.

The fight for a top four finish continues as Chelsea travel to Merseyside to take on Liverpool in a Super Sunday clash. With six games left in this season’s English Premier League; Chelsea along with Arsenal and Tottenham continue their fight to finish in the top 4 to ensure qualification in next season’s UEFA Champions League.

This game marks the return of ex-managers and players across both clubs. Fernando Torres and Rafa Benitez return to Anfield, both of whom were once legends in the eyes of the Liverpool faithful. Benitez is still very much liked by the Reds fans but its unlikely Torres will receive the same warm reception as his boss can expect.

Brenden Rodgers is also well known to Chelsea supporters as he has previously managed Chelsea’s youth and reserve sides and learned well under the watchful eye of Jose Mourinho. Glen Johnson and Daniel Sturridge (Ex-Chelsea players) and Benayoun (ex-Liverpool player) will also be up against their former clubs.

We are currently sitting 4th in the table after Arsenal moved into third with a win over Fulham on Saturday, although we have two games in hand over the north Londoners. We’re two points ahead of Tottenham though with both clubs having played 32 games. Tottenham host Manchester City in Sunday’s early kick-off, so by the time our game against Liverpool kicks-off we wcould see ourselves down to fifth and needing a win to move back into the top-four.

Liverpool are currently 7th in the table with 50 points from 33 games, six points behind 6th place Everton and five points ahead of 8th place West Brom. Considering the immense rivalry between the arch enemies, Liverpool’s main aim this season is to finish above Everton.

Liverpool’s season has been predictable in recent years. Start off with title aspirations, after a couple of months reality sinks in and they lower their expectations to a top-four finish but by the time the season nears its end beating Everton becomes the sole priority.

Chelsea came out on top in their last game against Fulham with a comprehensive 3-0 win at Craven Cottage, all three goals came from centre-backs. A stunner from David Luiz plus a headed brace from John Terry gave us only our second away victory of 2013. The goals tally for Chelsea defenders in all competitions this season now stands at 27 with seven for Branislav Ivanovic, six each for Terry and Gary Cahill, David Luiz with five, Ryan Bertrand two and Ashley Cole one. Liverpool on the other hand had to endure two successive 0-0 draws against West Ham at home and Reading way.

The obvious focus of attention will be on Fernando Torres – who makes only his second return to Anfield since his £50 million to Chelsea – and also Rafa Benitez, who spent six years at Anfield and was very much liked by the Liverpool fans during his time at Anfield.

Torres has been one of the in-form players for Chelsea recently and will be looking to continue his goal scoring form at Anfield. There will be jeers and boos from the Liverpool fans and they will be trying everything to try to unsettle the Spaniard, so he better be ready for it.

Last season saw Chelsea beaten 4-1 at Anfield but in the last 10 meetings (in all competitions) between the two sides its been all even with both sides winning four each with two draws. In the reverse fixture this season when Liverpool visited Stamford Bridge the game ended in a 1-1 draw with Suarez scoring the equalizer after John terry had headed Chelsea in front. Liverpool are looking to extend their unbeaten Premier League run against Chelsea to six games.

The man Chelsea should watch out for is Luiz Suarez who leads this season’s goal scoring charts with 22 goals. He along with Coutinho are the in-form players for Liverpool. The likes of Luiz, Terry and Ivanovic will need to be on their toes if they have to stop these two players. Chelsea on the other hand will be looking at their own midfield trio of Mata, Hazard and Oscar to deliver the goods. With Benitez’s rotation policy its difficult to say whether he will pick Ba or Torres for this one.

Chelsea welcome back Ashely Cole (hamstring) and Gary Cahill (knee), both of whom returned to training on Friday. Cole could get a start with Cahill on the bench but a final decision on Cole will be taken as late as Sunday morning. Marko Marin is also nearing full fitness and could be on the bench while Oriol Romeu (knee) is the only long term absentee for Benitez.

Liverpool remain without Fabio Borini (shoulder), Joe Allen (shoulder) and Martin Kelly (knee), who are all ruled out for the rest of the season. Raheem Sterling (thigh) faces a late fitness test after missing Liverpool’s last two games.

John Terry told chelseafc.com the following ahead of the game against Liverpool:

“It’s a must for the football club; for the supporters, for the club moving forward and maybe new signings in the summer, we’re obviously in the semi-finals of the Europa League but realistically we want to be playing Champions League football, that’s what it’s about for this football club. The players that have come here in the last couple of years, that’s what they want as well.”

“It’s a tough run-in and it starts with Liverpool away at the weekend, and we face Manchester United away a couple of weeks after that. It’s a busy schedule because we play on a Thursday [in the Europa League] and I think we have about four games in 10 days or something like that, but we’ve got the squad, the manager’s rotating and everybody’s playing a part.”

“He’s a great manager and was brilliant for myself and the other players, I can only speak highly of him, when Jose Mourinho was here he was always around. There were a couple of occasions when I was left out of the side or injured and he’d pull me to one side. He made a nice little video of me scoring goals, making tackles and had a 15-20 minute chat.”

“At the time it was something nobody had ever done, and it just goes to show his man-management skills. Little things like that, as a player, give you a boost when you’re down, and he was a real gentleman as well. He fed off Jose and learnt an awful lot, but you could see he always had it in him to go on. He had a great rapport with the players around the training ground on a daily basis and he speaks different languages which obviously helped.”

“For us as a group of players, when the games are coming thick and fast I think that’s when we’re at our best, it is a lot of games, but when you’re playing you don’t really get a chance to think about anything else. You don’t train too much, so you lose that side of it, which you can then put into the games.”

“It’s difficult to balance, but from my point of view I prefer to play two or three games a week, otherwise you get long, drawn out weeks and you end up doing a couple of days of running and feel just as tired.” 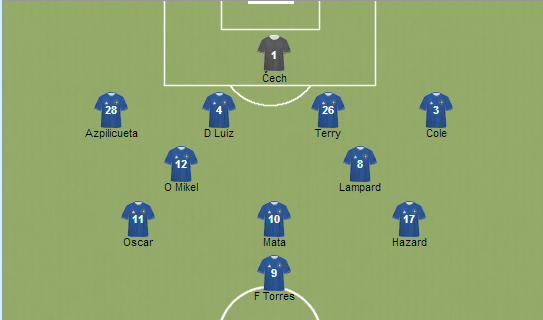 This is a tough one to call. On current form Chelsea look strong but the win against Fulham was just our 2nd away victory of 2013. Liverpool have played two goalless draws in their last two games so you’d expect this to be a tight affair, but the attacking talent on both sides is capable of doing some damage so I’m predicting goals.