Its back to Europa League this Thursday when Chelsea take on FC Basel in the 1st leg of Europa League Semi Final at St. Jakob-Park in Switzerland.

Chelsea come into this game after a disappointing draw against Liverpool, a game which was marred by one of the biggest sporting controversies of all time. The referee failed to see Luiz Suarez bite Branislav Ivanovic’s arm and the Reds striker went on to prevent Chelsea securing a vital win by scoring in the 7th minute of injury time. It was the biggest talking point of the match where Chelsea fans and Benitez were left fuming at the referee for not taking any action against Suarez even after Ivanovic had shown the bite mark just after the incident. And to make matters worse six minutes of added time was extended to the 7th minute for no particular reason.

Chelsea now are placed 4th in the table, 1 point behind Arsenal and one point above 5th place Tottenham, and with some tricky fixtures ahead a finish to top 4 and the vital Champions League spot is getting tougher.

But for now the focus shifts to the Europa League and we should concentrate on the task ahead against Basel. Not to forget that this is our only chance of Silverware this season and its one of the trophies which Chelsea have never won before.

The Europa League has reached its penultimate stage where the semi-final line ups sees Chelsea take on FC Basel while Fenerbache take on Benfica in the other semi-final clash. Chelsea crawled through after winning 5-4 on aggregate against Rubin Kazan in the quarter finals. Basel on the other hand edged past English counterparts Tottenham Hotspur thanks to a 4-1 penalty shootout win after the tie had ended 4-4 on aggregate.

FC Basel are defending Swiss League champions and are well managed by their 38 year old coach Murat Yakin. Basel carry with them a good home record in this seasons Europa League, having played six matches since the start of the group stage, they are unbeaten in those six games with four wins and two draws.

Chelsea on the other hand have lost their last two away fixtures in the UEFA Europa League, and four of their past five European away games. FC St Gallen is the only Swiss side which Chelsea have faced before and this was in the first round of 2000/01 UEFA Cup when Chelsea lost the game 2-1.

Here is what Rafa Benitez and Fernando Torres told Chelseafc.com ahead of the game:

‘All the team is enjoying this competition,’ Torres said.

‘To be out of the Champions League was a very disappointing time for us but we started thinking about the Europa League and it is one of the more important targets for us this season.

‘We have given a really good performance in this competition and we have shown everyone who was maybe saying Chelsea do not care about this competition, they are going to be more focused on the FA Cup and the league, that it was not true. We are already in the semi-finals and we want to go through.

‘I am a part of a team and the team is doing really good performances, so it is easy for a striker to score goals when the team plays well.’

Here is what the boss said ahead of the match:

“We have had good teams in the Europa League,’ he said, considering Sparta Prague, Steaua Bucharest and Rubin Kazan. ‘Basel is in the semi-final and deserve to be there. They’ve worked very hard, have played well, and are well organised. They press well and play good counter-attack. They have good players with pace and ability so we will have to do really well if we want to win.

‘Philipp Degen was my player [at Liverpool] and is a good professional, a worker and enjoys playing football. They have some good young players and others with more experience.”

Its good news for Chelsea as both Ashely Cole (hamstring) and Gary Cahill (knee) have recovered from their injuries and have traveled to Switzerland to face FC Basel. Cole has recovered from a hamstring strain suffered in the home game against Manchester United on 1 April, while Cahill underwent a minor knee operation on 30 March.

Demba Ba is cup tied once again so it will be Fernando Torres who will lead the attacking force. Oscar continues to recover from a mild groin strain suffered against Liverpool. With one eye on the game against Swansea this weekend Benitez would definitely make changes to the side that will face Basel on Thursday. 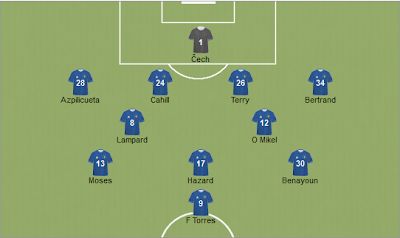 As mentioned above in our preview, Basel haven’t lost a home game in Europa League this time around and Chelsea on the other hand have lost their last two away games. And with one eye on the weekends clash with Swansea in mind I will go for a scored draw.