Its going to be a big night for Chelsea at the Amsterdam Arena as we gear up for the Europa League Final against Portuguese opponent Benfica. This final will be the penultimate game of our 2012-13 campaign and a Europa Cup will be a welcome prize for the Chelsea players after a grueling season.

Chelsea have never tasted Europa League glory before and if we win then we will make it back-to-back European competitions, having won the UEFA Champions League last year. Jose Mourinho achieved the same feat when he managed Porto by winning the Europa Cup and then the Champions League in consecutive seasons. Chelsea could also become only the fourth team to lift all three of UEFA’s major club trophies, after Juventus, Ajax and Bayern Munich; the European Cup Winner’s Cup in 1970/71 & 1997/98 and the UEFA Champions League last year 2011/12.

Having already secured Champions League qualification for 2013-14 season Chelsea can now breathe easy and focus entirely on their clash against Benfica. A home game against Everton at the weekend will be our last game of the season and it will also mark the last game in charge for Rafa Benitez, who will leave after the game at Stamford Bridge.

Both Chelsea and Benfica wouldn’t have thought of it coming to this when it all started for both teams in the UEFA Champions League this year. But both were knocked out at the group stages of the competition, Chelsea at the hands of Juve & Shakthar whereas Benfica at the hands of Barcelona & Celtic.

It was not that long ago since we met Benfica as we played them in the knockout stage of last years UEFA Champions League. Although Chelsea came out on top and progressed to the semis, it was a hard fought match over the two legs. Chelsea who travelled to Benfica for the first leg, came out on top with a narrow 1-0 win courtesy of a goal by ex- Chelsea man Salomon Kalou.

With that scoreline and the second leg being at Stamford Bridge, it was thought that Chelsea would easily progress but it proved to be otherwise, Chelsea did go ahead with a well taken penalty by Lampard but Javi Garcia equliased for Benfica late in the second half to set up a thrilling finish, one more goal and Benfica would have progressed at the expense of Chelsea. But another ex-Chelsea player Raul Meireles scored the winner in stoppage time to take Chelsea into the semi-finals of 2012-13 UEFA Champions League competition.

With Chelsea clearly aware of what problems Benfica can cause, this game again promises to be a close fought affair. And with the Europa Cup at stake it will be more fierce and competitive than the game that took place last year with both teams going all out for this single leg game.

Benfica come into this game on the back of a disastrous last-minute defeat to arch rivals Porto which could cost them their domestic title, incidentally this was their first loss since September. Kelvin scored an injury-time goal as Porto won 2-1 to end Benfica’s unbeaten domestic league season and go top heading into the final day. Benfica manager Jorge Jesus’ ambition will certainly be to lift the Europa League cup but also to win the Portuguese SuperLiga. So with one eye on the last day results in mind Jorge will definitely look to divert his players focus away from domestic competition to the Europa League finals come this Wednesday at Amsterdam Arena.

Chelsea on the other hand come into this fixture after having secured their Champions League status for next season. A hard fought 2-1 win against relegation contenders Aston Villa was the perfect result which Chelsea could have asked for before going into Wednesday’s final. Frank Lampard’s brace in the second half was enough to secure our top-four status ahead of the last day fixture against Everton at home. The Blues have been on an incredible run off-late by going unbeaten in their last eight matches.

Route to the final

Benfica strikers Oscar Cardozo and Lima will be the men to watch out for as the pair have scored 44 goals between them. And with the talented Pablo Aimar and Nemanja Matic in the midfield Benfica do posses the attacking threat to muster Chelsea’s defense. A point to note will be that Oscar Cardozo has scored in six of his team’s last ten matches against English teams.

This game marks Rafa Benitez’s last European game for Chelsea, Benitez has done a decent job since he took over from Di Matteo. He came into the club knowing that he was the Interim Manager and would be departing at the end of the season irrespective of the results he achieves. It all started off on a bad note for the former Reds manager, given his previous connections with Liverpool and his comments regarding Chelsea Football Club during his reign at Merseyside. A Europa League Cup will mark a fitting a farewell for Benitez, who himself will have this win as a silver lining on his CV.

Captain John Terry is a serious doubt with a knee injury picked up against Villa on Saturday. He will train with the squad today and a late decision will be made over his involvement. Attacker Eden Hazard has been ruled out with a hamstring injury that forced him off at the weekend. John Obil Mikel (hip) and Ryan Bertrand (knee) have missed Chelsea’s last four matches but have traveled with the squad. Demba Ba who is cup-tied also forms the part of the 25-man squad traveling to Holland, but wont feature.

Jorge Jesus has no injury concern ahead of the final at Amsterdam and will field his strongest side in-spite of the important last day domestic league fixture that could be the title decider. Cardoza will lead the attack along with Lima and Aimar. Salvio and Gaitan are expected to take the wide flanks with Matic in the central holding midfielder role. Despite their defeat against Porto, Jorge might be tempted to field the same defensive line-up for the final.

“Hazard will not be available. John still will try and see how he feels but we will decide tomorrow, Now it is not easy for him, obviously it is not the best injury but we will see today and tomorrow with the medical staff, and after we will decide.”

“Jorge Jesus is a good manager, they are a good team and they have experience in Europe, In a final it is 50-50 and we will see what happens. We can make changes, they can make changes but in the end it depends on the players on the pitch.”

“We can be ready but still something can change the game. It will be an interesting final for everyone, they have experience and hopefully we can use our experience too.”

“A European final is massive. Maybe you can score an early goal and change, or concede three and have to change at half-time. You have to have confidence and belief you can do well. Your team has to have the same feeling, and you have to see what happens but it depends on the other team too.”

“This is the final and I want to win. If we can do it I will be really proud because we worked so hard in difficult circumstances. You have to give credit to all the people involved, the staff and the players.”

“We have been playing two games per week so every time, it doesn’t matter the name of the opponent, we have had to deal with a small squad, injuries or suspensions, every game was difficult, so all of them.”

“If we win it will be easier for people to realise to be here at this stage of the competition means we have done a lot of things well.”

“You can always improve, or make more mistakes. It is not an easy situation but we managed quite well. I think people realise now this is right. We have the feeling we have done a good job and hopefully we can do even better.” 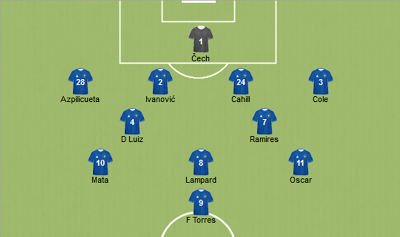 Predicting for a final is never an easy task. Any Cup final promises to be a tough game, with both sides eager not to give away any goal, so we can expect a defensive display from both teams at the start. I do expect both teams to score and the second half could get really interesting if either Benfica or Chelsea score in the first half. Given the experience I expect Chelsea to come out on top but by only a single goal margin. Benfica 1 Chelsea 2

What do you think the score will be and what would be your starting eleven for the game? Get involved in the comments section below.