Chelsea welcome Fulham to Stamford Bridge on Saturday evening looking to get back on track after a difficult few weeks. Here’s the team we think Jose will pick

The Blues season has taken an unexpected turn for the worse with the west Londoners win-less in their previous four outings. Following a bore 0-0 draw with Manchester United at Old Trafford, Jose Mourinho’s men lost to Bayern Munich in a penalty shoot-out in the final of the European Super Cup.

Defeat to Everton on Saturday was followed by a shock 2-1 home defeat to FC Basel in the Champions League on Wednesday so Mourinho is expected to rotate his squad once again this weekend.

Up front is a particular area of concern right now with none of the clubs three senior strikers finding the target so far this season. New signing Samuel Eto’o was selected in midweek but Fernando Torres could find himself thrust back into the first team after being left out of the squad entirely against Basel.

Willian also failed to impress on his debut so Juan Mata could come back in while Oscar should retain his place following a goal-scoring display in midweek. Skipper John Terry is almost certain to be recalled as is Ramires after he served his European suspension.

Here’s the team we think Jose might go with: 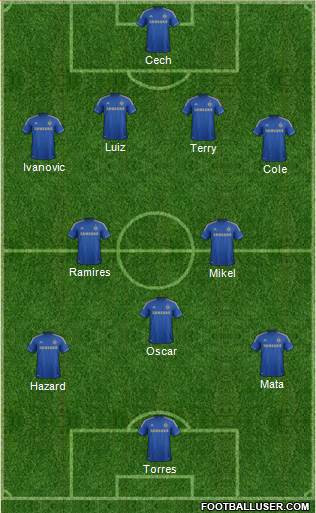