Liverpool welcome Southampton to Anfield on Saturday afternoon looking to extend their lead at the top of the table. Here is the team we think Rodgers will pick

The Reds moved one point clear of second placed Arsenal with a 2-2 draw against Swansea on Monday night to maintain the only unbeaten record in the division.

Brendan Rodgers lost influential attacker Philippe Coutinho that night with a shoulder injury that’s likely to keep him out for up to six weeks so Iago Aspas could come in to the team this weekend, although Raheem Sterling is another option for the Northern Irishman.

Daniel Agger is a major doubt after missing the Swans clash so Mamadou Sakho could continue his partnership with Martin Skrtel at the back. There has been talk that Kolo Toure could replace Andre Wisdom at right back but it remains to be seen whether Rodgers will go with this option or stick with the same back-four that played last week.

Victor Moses will keep his place after scoring on his debut on Monday. Here is our predicted team: 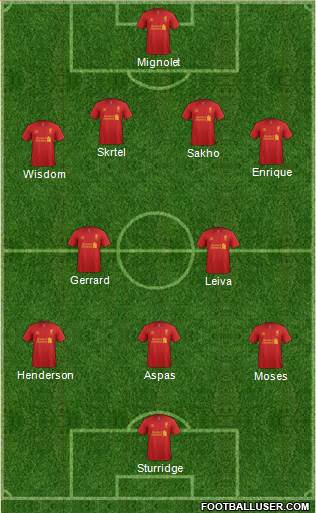