Chelsea take on League One side Swindon Town at the County Ground in the third round of the Capital One Cup on Tuesday night. Here is a preview for the game.

Chelsea take on League One side Swindon Town at the County Ground in the third round of the Capital One Cup on Tuesday night.

The Blues ended a disappointing run of four games without a win on Saturday as they eased past local rivals Fulham 2-0 at Stamford Bridge. Despite the scoreline, it was far from a convincing performance from the Europa League winners so Jose Mourinho will be looking for an improved display tonight.

The Portuguese coach has confirmed that out-of-favour duo David Luiz and Juan Mata will be recalled for the game after both being left out of the squad at the weekend.

Spanish playmaker Mata has been told he must adapt to Mourinho’s new style of play if he’s to cement a regular first team place, so he’ll be looking to impress against Swindon tonight. Luiz has also found himself out in the cold for much of the season with the Brazilian only making three starts so far – with each ending in defeat for Chelsea.

The League Cup has been a happy hunting ground for Mourinho in the past, with him winning the trophy twice in three years during his first spell in charge, so he’ll be looking to continue that excellent record this season.

With Chelsea facing a tough trip to White Hart Lane on Saturday lunchtime, Mourinho is expected to make wholesale changes to his starting eleven and he’s got a fully-fit squad to choose from.

As well as Mata and Luiz being recalled, Fernando Torres could also come back in for the miss-firing Samuel Eto’o while Willian is likely to be given another chance to impress since making a big-money move in the summer.

Cesar Azpilicueta, Ryan Bertrand and midfielder Michael Essien are also likely to start along with Belgian winger Kevin De Bruyne while Mark Schwarzer could get a start in goal.

Swindon will be without injured quintet Alex Smith, Ryan Mason, Ryan Harley, Aaron Oakley and Tijane Reis for the game, while Nathan Bryne misses the third game of his three-match ban through suspension.

However, the Robins welcome back on-loan Spurs player Alex Pritchard who returns from his own suspension. 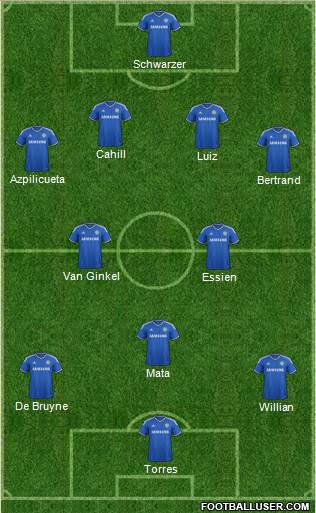 Juan Mata: All eyes will be on the little attacker who’s fall from grace has come as a huge shock to many. He’s far too talented to become a fringe player at Chelsea so hopefully he can show Mourinho what he’s capable of tonight.

Swindon 0-3 Chelsea: Despite a much-changed line-up, the Premier League side should have too much for their League One opposition.