Arsenal take on West Brom at the Hawthorns tonight in the third round of the League Cup. Here’s a preview with team news, likely line-up and predicted score.

Arsenal will look to continue their impressive recent run as they take on West Brom at the Hawthorns tonight in the third round of the League Cup.

The Gunners stretched their winning run away from home to an incredible 10 games with victory over Marseille last week and that was followed up with a 3-1 win over Stoke at the Emirates on Saturday to move top of the Premier League, so we should certainly be heading into tonight’s game full of confidence.

We crashed out of this competition at the quarter final stages last year after losing on penalties to Bradford City. It was certainly a night to forget for everyone involved with Arsenal Football Club and there’s little doubt the players took their opposition far too lightly on that occasion, so we have to make sure we don’t make the same mistake this time around.

It’s been well documented that we haven’t won a trophy for over eight years so we should be looking at the League Cup as a realistic way to end that drought, but with the injuries piling up it’s no surprise that Arsene Wenger’s has opted to rest several key men tonight’s game.

With Theo Walcott the latest player to be ruled out through injury. The winger has joined an ever-growing injury list that already includes Alex Oxlade-Chamberlain, Lukas Podolski, Tomas Rosicky, Santi Cazorla, Yaya Sanogo and Abou Diaby.

With those players all unavailable and crucial games with Swansea and Napoli coming up, Wenger has left the likes of Aaron Ramsey, Olivier Giroud, Mesut Ozil, Jack Wilshere and Bacary Sagna back in London.

Lukasz Fabianki could start in goal while the defence will include Thomas Vermaelen, Nacho Monreal, Per Mertesacker and Carl Jenkinson. Mikel Arteta is also in line for his first start of the season and could be joined by Mathieu Flamini in midfield with the Frenchman also making the squad.

The big news is that Nicklas Bendtner is expected to make his first start for Arsenal in almost two years and he could be joined by Serge Gnabry and Ryo Miyaichi in attack.

West Brom are expected to recall striker Shane Long after he recovered from a recent knee complaint. Midfielder Chris Brunt is also in contention after overcoming a groin problem but Ben Foster, Matej Vydra, Zoltan Gera, George Thorne remain on the sidelines. 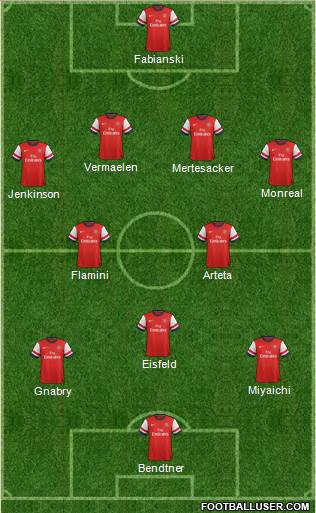 Nicklas Bendtner: The big Dane has a huge chance to revive his Arsenal career tonight and all eyes will be on how he performs up front for the Gunners. He’s unlikely to be 100% match fit but if he shows enough desire I’m sure he’ll cause the home side some problems.

WBA 0-2 Arsenal: Despite fielding a severely weakened side I think we’ll still have enough to see off a tough West Brom outfit. The back 5 and the two holding midfielder are all experienced first team players so it will be down to the attackers to do the business at the other end.