Arsenal get back to Premier League action when they take on Swansea City at the Liberty Stadium on Saturday. Here’s my predicted starting eleven for the game.

Arsenal get back to Premier League action when they take on Swansea City at the Liberty Stadium on Saturday night.

We currently sit top of the table heading into this weekends round of fixtures and we continued our excellent recent run with a hard fought victory over West Brom in the League Cup on Wednesday night.

Due to the current lengthy injury list, Arsene Wenger was forced to play a weakened line-up for the game but it gave many of the first team a well deserved rest.

The likes of Jack Wilshere, Bacary Sagna, Aaron Ramsey, Olivier Giroud, Mesut Ozil, Wojciech Szczesny, Kieran Gibbs and Laurent Koscielny were left at home and they can all expect to be recalled for this weekends trip to Wales.

Mikel Arteta made a successful comeback on Wednesday, making his first start of the season, but he was withdrawn late on with cramp and I don’t expect he’ll start again this weekend. The team practicaly picks itself these days but the one area of contention is who fills in for Theo Walcott while he’s out injured.

Serge Gnabry started against Stoke on Sunday and did OK, but I was a little disappointed with him against West Brom. He’s also played a lot of minutes over the past 4 days so I’d like to see us do something different and start Carl Jenkinson on the right wing this Saturday.

He was excellent against the Baggies and was our main attacking threat, despite playing at right-back. We all know Jenks loves to get forward and he’s got an excellent delivery on him, so I could see him being a real threat when given more freedom further up the field. He’d also provide that extra defensive support to Sagna which will be important, especially away from home. 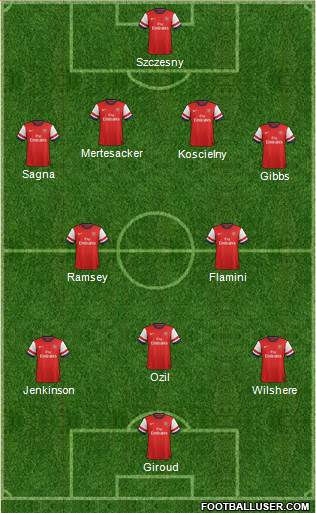 What do you think of the team? Would you start Jenkinson on the right? Share your views below.