Manchester United get back to Premier League action this weekend as they welcome West Bromwich Albion to Old Trafford. Here is my predicted team for the game.

Manchester United get back to Premier League action this weekend as they welcome West Brom to Old Trafford.

The champions edged out Liverpool in the Capital One Cup in midweek but David Moyes played a weakened side for the game and is expected to recall a number of first team regulars this weekend.

The likes of Rio Ferdinand, Nemanja Vidic, Patrice Evra, Michael Carrick and Antonio Valencia were omitted from the starting eleven against Liverpool so can expect to come straight back in against the Baggies.

Rafael made a successful return from injury on Wednesday and should once again start at right back as long as he shows no ill-effects from the game, while Wayne Rooney is also likely to keep his place despite Javier Hernandez’s match-winning performance.

Marouane Fellaini was cup-tied so he is likely to be recalled while Shinji Kagawa may keep his place after a lively outing. Striker Robin van Persie has missed the last two games with a minor groin problem but is expected to be passed fit for Saturday’s clash. Therefore, here is my predicted team: 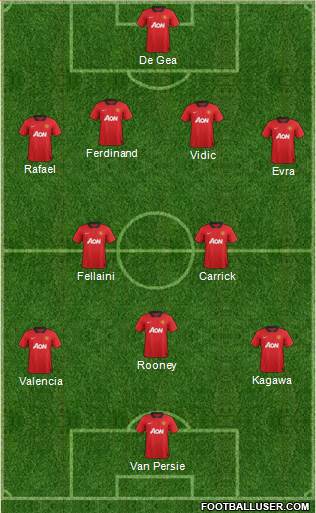 What do you think the team will be? Share your views below.