Tottenham take on Newcastle at White Hart Lane on Sunday looking to close the gap on league leaders Arsenal. Here is a predicted starting eleven for Spurs.

Tottenham take on Newcastle at White Hart Lane on Sunday looking to close the gap on league leaders Arsenal.

Spurs head into the weekend action sitting fourth on goal difference but can move to within two points of the Gunners with a win over the Magpies ahead of their rivals clash with Manchester United later in the day.

Boss Andre Villas-Boas made wholesale changes for Thursday’s 2-0 win over FC Sheriff in the Europa League, so we should see a number of first team regulars return to the starting line-up this weekend.

Hugo Lloris sat out the midweek game but is expected to be recalled on Sunday. The goalkeeper was knocked out against Everton last weekend but has trained all week and is fit to play.

Michael Dawson and Vlad Chiriches should come back in to the defence with Paulinho also likely to be recalled in midfield. Mousa Dembele might get the nod over Etienne Capoue with Sandro set to miss out after picking up a hamstring strain last week.

Andros Townsend, Lewis Holtby and Aaron Lennon could all start in attack behind Roberto Soldado with the likes of Erik Lamela, Christian Eriksen and Jermaine Defoe dropping back to the bench.

Danny Rose is likely to continue on the sidelines as he struggles to overcome a foot problem. Here’s the line-up AVB might go with: 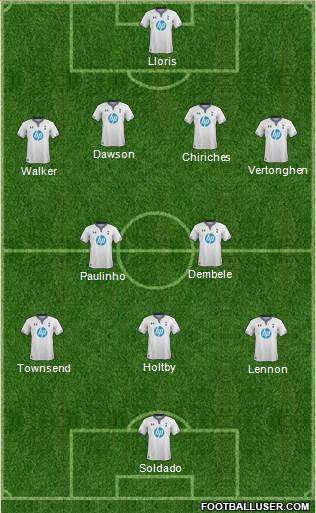 What do you think of our line-up? What team would you start? Share your views below.