Arsenal entertain high-flying Southampton at the Emirates Stadium this weekend. Here’s the starting eleven manager Arsene Wenger could go with for the game.

Arsenal entertain high-flying Southampton at the Emirates Stadium this weekend looking to extend their lead at the top of the Premier League table.

Boss Arsene Wenger confirmed on Thursday afternoon that Theo Walcott is back in the squad after recovering from an abdominal strain, so I’d like to see the winger come straight back in to the team as we’ve badly missed his pace in recent weeks.

Mathieu Flamini will miss the game through suspension after picking up his fifth booking of the season against Manchester United last time out, so Aaron Ramsey will start alongside Mikel Arteta in midfield.

Tomas Rosicky faces a late fitness test but is expected to be passed fit after recovering from a bout of sickness while Jack Wilshere is also likely to be in the squad after Wenger confirmed the midfielder didn’t suffer any injury set back while away with England, but I expect we’ll see Jack on the bench after featuring in both games for his country in the last week.

Here’s the starting eleven manager Arsene Wenger could go with for the game: 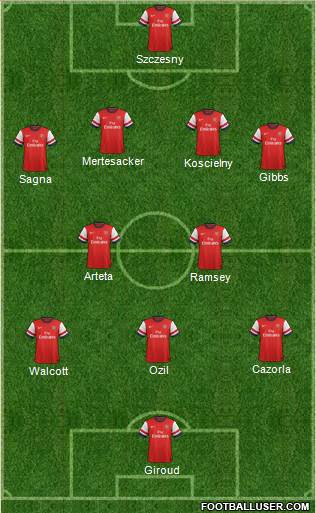 What do you think of my line-up? What would your team be? Share your views below.