Liverpool take on Mersey rivals Everton at Goodison Park on Saturday afternoon. Here’s the starting team boss Brendan Rodgers could go with for the game.

Boss Brendan Rodgers has confirmed that defender Jose Enrique is set for a spell on the sidelines with the Spaniard due to go under the knife to cure a long-standing knee problem. His absence means that Aly Cissokho is expected to continue to fill in at left-back, although Mamadou Sakho could be moved out to the left from his more traditional central role.

Rodgers reverted back to a more traditional 4-4-2 formation against Fulham last time out and and is likely to stick with the same set-up against the Toffees, meaning Daniel Agger should continue at the heart of defence with Kolo Toure and Martin Skrtel fighting it out to start alongside the Dane.

In midfield, Jordan Henderson is likely to continue on the right with Philippe Coutinho on the left, keeping Victor Moses on the bench. Steven Gerrard and Lucas Leiva are expected to start in the centre of the park once again.

Daniel Sturridge played the full 90 minutes for England against Germany on Tuesday despite carrying a leg injury in recent weeks and Rodgers has confirmed he’ll be assessed on Friday, but the striker is expected to be passed fit to play. Luis Suarez is due back late on Thursday night from his exploits with Uruguay but is likely to start despite his long haul trip across the globe.

Here’s the team Rodgers could go with: 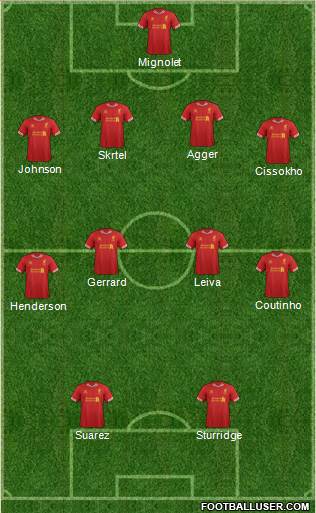 What do you think of our team? What team would you go with? Share your thoughts below.