Tottenham make the short trip across London to take on Fulham on Wednesday evening. Here, Spurs Blogger previews the game including his preferred line-up.

Tottenham make the short trip across London to take on Fulham on Wednesday evening. Here, Spurs Blogger previews the game.

We return to Premier League action in midweek as we face Fulham at Craven Cottage on Wednesday night, and this match couldn’t have come at a better time.

We face a Fulham team of which only three days ago fired their manager, Martin Jol, replacing him with Rene Meulensteen – who has managed one team since 2007 and that only lasted 16 days in charge of Russian outfit Anji Makhachkala.

Fulham also host us after a run of six loses, including a 3-0 defeat to West Ham on Saturday. A run of merely four points in the last ten home games, have ended the hoodoo around Craven Cottage, as it used to be a difficult place to travel.

Yet saying this, Fulham have a number of players who’re able to hurt us. Our old favourites Dimitar Berbatov, Adel Taarabt, Darren Bent, and of course Scott Parker.

We visit Craven Cottage also on a bad run of results in the league, going the last four matches without a ‘W’, with draws coming against Everton and Manchester United, whilst also losing against Manchester City and Newcastle.

However, our players will be in high confidence, coming of the back of a good point against Manchester United and finally finding our goal scoring touch, with that match ending in 2-2 draw.

Fulham will seemingly be looking to rotate their squad, after their disappointing 3-0 loss to West Ham, with players such as Bryan Ruiz and Phillipe Senderos looking to take advantage of a new manager to push their way into contention. The Cottagers will continue to be without Berbatov however, as he continues to recover from injury, suggesting our former striker, Darren Bent could line up against us.

Brede Hangeland could make his much anticipated return at centre half, whilst Sasha Riether could miss out again. Damien Duff and Hugo Rodaellga could also miss the fixture, leaving Rene with a number of decisions, as he attempts to form his own team.

Andre could ring the changes for the game at the Cottage, as Andros Townsend, Gylfi Sigurdsson and Lewis Holtby will hope to feature in our midfield, whilst Erik Lamela will be hoping to return to the side after his mysterious withdrawal from the team against Manchester United.

Christian Eriksen and Danny Rose continue of their paths back from injury, so neither make the trip. 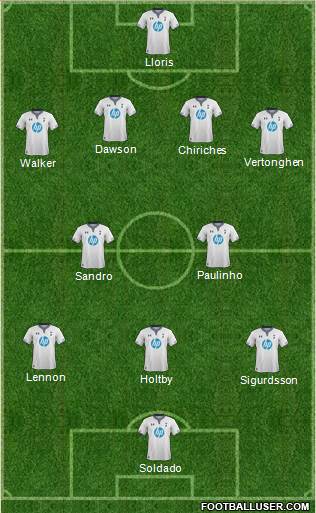 I think we’ll win this match, as I can’t see this toothless Fulham side scoring, especially if an out of form Darren Bent leads their attacking line. I’m going for a 0-2 win to us, with Robbie Soldado finally returning to the score sheet, along with Andros Townsend.