Arsenal beat Hull 2-0 on Wednesday to remain four points clear at the top of the league. Gooner Daily gives us his thoughts and player ratings from the game.

Arsenal beat Hull 2-0 on Wednesday night to remain four points clear at the top of the league. Here, blogger Gooner Daily gives us his thoughts and player ratings from the game.

Arsenal hosted Hull City on a cold night in North London and will be elated to have taken three deserved points despite the fact that Arsene Wenger chose to rest a considerable number of his squad following the win over Cardiff.

Both regular full-backs, Bacary Sagna and Kieran Gibbs, were replaced, Mathieu Flamini stepped in for Mikel Arteta in midfield, Tomas Rosicky came in for Jack Wilshere while in attack, Nicklas Bendtner replaced Olivier Giroud up top. 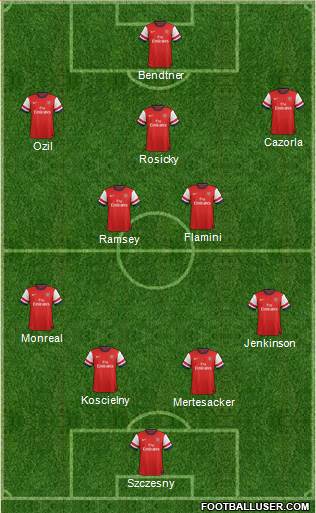 Listed below are Gooner Daily’s ratings for the players that tamed the Tigers;

Wojciech Szczesny: The Pole had a rather uneventful evening with the Gunners spending a considerable chunk of time in the opposition half but made some routine saves as the game progressed. 7/10

Carl Jenkinson: Jenks hasn’t started a league game since the North London Derby in September and was very disappointing in the Capital One Cup Fourth Round tie against Chelsea. With Sagna suffering an injury prior to the game, Wenger gave the young lad another chance and he grabbed it with both hands. His cross to Bendtner was a peach. 8/10

Nacho Monreal: When you can afford to give a good player like Kieran Gibbs a breather, you’d have no problems bringing on a Nacho Monreal in his stead. The Spanish full-back anticipated the ball a lot of times during the course of the game and he’d be happy that he has given his manager something to think about. 7/10

Per Mertesacker: The captain of the night was his usual efficient self, doing what he does best in the heart of Arsenal’s defense. 7/10

Laurent Koscielny: His partnership with the BFG has really blossomed as both players have fought hard to keep Arsenal’s six clean sheet in seven games. Koscielny had a couple of half chances on the other end of the pitch but he worked tirelessly to ensure that the Hull forward line had bad days in the office. 7/10

Mathieu Flamini: The Frenchman worked hard in midfield and always made himself available for a pass. He was as tenacious as ever, making those crunch tackles you’d expect to see from him. 7/10

Aaron Ramsey: This lad has grown in confidence and like Midas, everything he touches turns into goals. Ramsey had a couple of snuffs at goal, but he sealed the points for his team with a breathtaking assist for Mesut Ozil that finished aplomb.

Santi Cazorla: This was a much-improved performance from the diminutive Spaniard, and his influence on the game was felt. However, he left his shooting boots at home. 7/10

Mesut Ozil: The German playmaker pulled the strings in midfield as you’d expect, and he must be delighted to have scored the goal that clinched the game for his team. 8/10

Tomas Rosicky: Showed off his vast energy levels and pressed high up the pitch for his team. 7/10

Nicklas Bendtner: Following his torrid performance against Chelsea, many harbored thoughts that he had played his last game for the club before departing in January. However, the ‘World’s Best striker’ started ahead of Giroud and got on the score sheet after just two minutes. He went on to have a decent game before he was replaced by Walcott. 8/10

Theo Walcott: The English speedster replaced Bendtner but he failed to have any impact on the game whatsoever in his “favored” striking position. 6/10

Jack Wilshere: Didn’t do half badly after replacing Rosicky. He also made those trademark lung-bursting runs and almost fashioned a chance for Ozil. 7/10

Mikel Arteta: Didn’t play long enough to get a rating.