As we enter 2014, Tom Gatehouse picks his Team of New Year’s Day. Do you agree? Have a look at the eleven he’s gone for here and let us know what you think.

The current Premier League season has proved to be quite the roller-coaster so far, and as we enter 2014, I have no doubt that the English top flight will continue to astound and excite the millions of fans in its uniquely gripping way.

Those able to crawl out of bed, nursing their respective hangovers, and watch the New Year’s Day round of matches cannot have been disappointed. Every team took part in what was yet another scintillating match day full of great goals and inspired displays.

In the aftermath, the situation at the top of the league is still as tight and uncertain as ever, with only the smallest of gaps separating those in the top four.

Here is the Football-Team of the New Year’s Day, Gameweek 20: 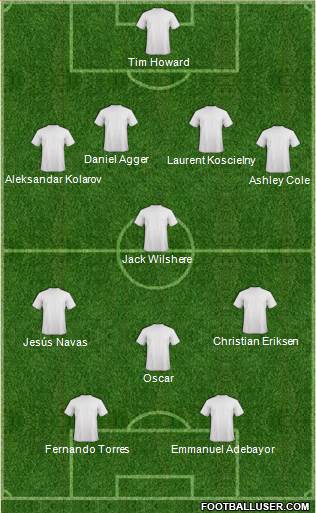 The American could do little about Stoke’s goal, which came at him through a crowd of players, but the Toffees’ stand-in captain handled well, and will be pleased with his overall performance.

Took his chance to impress having sat on the bench in recent weeks, the England man made some vital blocks and interceptions as Chelsea ran out 3-0 winners.

Thumped in the opening goal, and was crucial for Liverpool at the back. An excellent showing from the Dane.

The Gunners back-line was on top form in the 2-0 win over Cardiff, with Koscielny looking particularly imperious. It’s not surprising that Arsenal currently have the best defensive record in the league.

A super goal and another adventurous display from the Serbian left-back. Must surely be first choice for Manuel Pellegrini by now!

Celebrating his 22nd birthday, Wilshere excelled in the middle for the Gunners with some menacing approach play, and incisive passing. One of his best performances this season.

Ran the Swansea defence ragged, and even pulled off a ‘Pele-esque’ dummy on the befuddled Ben Davies. Was always involved in attack, and also defended with purpose.

One of a number of  Spurs players who seems to have found a new lease of life under Tim Sherwood, the Dane set up Emmanuel Adebayor for the first Spurs goal at Old Trafford, before reacting quickest to sneak in the second.

Convincingly swung the game Chelsea’s way when he came on at St Mary’s, the Brazilian set up two, and slotted in the third. Ludicrously chose to dive theatrically when faced with an open goal, but his overall performance will see it instantly forgotten.

The Spaniard was red-hot against Southampton, and was unlucky not to have added to his one-goal tally after a number of swashbuckling runs.

Certainly the most improved player in the Premier League in the last month. A superbly timed header set Spurs on their way against Man Utd, prompting his manager to use the word ‘unstoppable’ when describing his revitalised striker after the game.