Liverpool entertain Aston Villa at Anfield on Saturday evening hoping for another 3 points. Here is the team news and predicted starting eleven for the game.

Liverpool entertain Aston Villa at Anfield on Saturday evening with the Reds hoping to cement their place in the top four of the Premier League.

Brendan Rodgers gave the latest team news earlier today and confirmed that midfielder Joe Allen is back in contention after returning to training this week following three weeks on the sidelines.

The Welshman may, however, have to make do with a place among the substitutes with Rodgers likely to stick with his trusted central midfielder partnership of Steven Gerrard and Lucas Leiva.

The back five are expected to remain unchanged, despite shipping three goals at Stoke last time out. Daniel Agger remains out with a calf strain, Mamadou Sakho faces a late fitness test following a hamstring injury while Jon Flanagan and Jose Enrique are still working their way back to full fitness, so Rodgers is left with little options at the back.

Daniel Sturridge returned from a seven week lay-off last weekend, coming off the bench to score one and set up another, so he’s expected to be recalled to the starting line-up on Saturday and resume his deadly partnership with Luis Suarez.

The man who could make way is winger Raheem Sterling. The youngster has played a lot of football lately so Rodgers may decide to give him a well-earned breather. 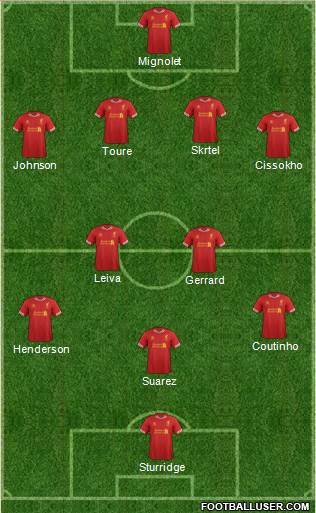