Arsenal entertain Crystal Palace at the Emirates on Sunday afternoon. Here is the latest Gunners team news and a predicted starting line-up for the game.

Arsenal entertain Crystal Palace at the Emirates on Sunday afternoon looking for a win to move back to the top of the Premier League.

Arsene Wenger has been speaking to the media at his pre-match press conference this morning and gave Arsenal.com the latest team news ahead of the game.

There was positive news on the fitness of Jack Wilshere with the boss revealing that although he won’t be back to face Palace this weekend due to his niggling ankle injury, the 22-year-old should be fit to face Liverpool the following week.

Wenger also confirmed that Aaron Ramsey is facing up to six weeks out after suffering a set back in his recovery from a thigh injury while Mathieu Flamini starts his three-match ban after being sent off against Southampton in midweek.

There was some positive news with Tomas Rosicky back in the squad having trained on Friday. Here is the bosses injury update:

We have good news. For Sunday he will be short but he has a chance to be available for the week after at Liverpool.

It is certainly a few weeks. It will be between four to six weeks. I count six. So I have no bad surprise but of course it’s a blow for us because we recently lost Walcott for a long period, now Ramsey is out for a long period and it’s a setback.

on his other team news…

From the Southampton game, the only change that will have to be made is Flamini is out. Everybody else I hope will be available.

Rosicky is back in the squad certainly. He is joining full training today.

So with Wilshere, Ramsey and Flamini all out it leaves Wenger short of option in the middle of the park. The likelihood is that Rosicky may partner Mikel Arteta with Oxlade-Chamberlain potentially replacing Serge Gnabry on the right wing. The German has started the last four games and could do with a rest so if the boss feels The Oxe is fit enough to start, we could see both him and Rosicky make the XI – although they could swap positions from what I’ve predicted below.

Kieran Gibbs is almost certain to come in at left-back after Nacho Monreal struggled in midweek but the rest of the team should remain unchanged. We are expected to announce the signing of midfielder Kim Kallstrom tonight but I doubt we’ll throw him straight into the team this weekend.

Here is my predicted team: 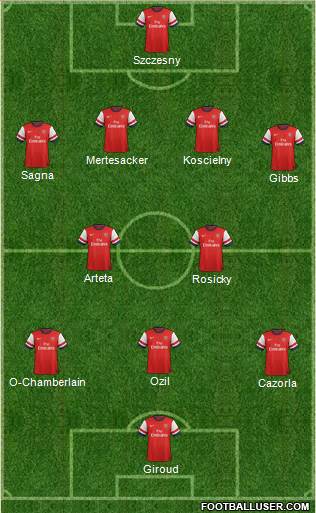