The Football-Talk Team of the Weekend – Chelsea and Liverpool Dominate

Chelsea climbed to the top of the league thanks to an Eden Hazard hat-trick while Liverpool thrashed Arsenal, but do you agree with the Team of the Weekend?

Chelsea shot to the top of the Premier League this weekend, with Eden Hazard’s stunning hat-trick allowing Chelsea to leap-frog both Manchester City and Arsenal at the top. Jose Mourinho is stubbornly insisting that the Blues cannot be considered title contenders, with his ‘little horse’ analogy doing the rounds to almost audible scorn and envy.

It was certainly Chelsea’s weekend, with both Arsenal and Manchester City failing to keep pace with the West London side. Arsene Wenger watched aghast as Liverpool opened up the Gunners like a bag of crisps on Saturday, with four goals in the first 20 minutes settling matters convincingly, as Brendan Rodgers’ side ran out 5-1 winners.

City could do little better in terms of points taken, with Pellegrini’s men held to a frustrating 0-0 draw by Norwich. Manchester United’s struggles continued with a dramatic 2-2 draw with Fulham at Old Trafford, with Tottenham taking advantage to move six points clear of the champions in 5th, following a hard-fought 1-0 win over Everton.

Here is the Football-Talk Team of the Weekend for Gameweek 25: 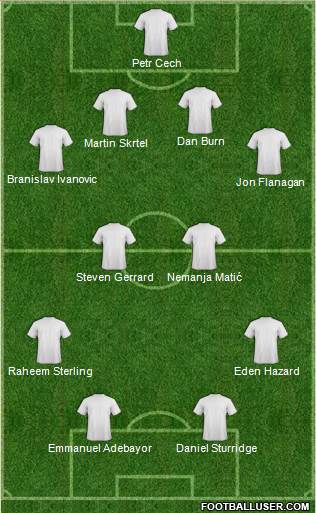 Chelsea’s number one proved for the umpteenth time that he is still one of the very best keepers in world football with a string of saves, with his most important coming against Moussa Sissoko in the first half, a save that Newcastle boss Alan Pardew later claimed was the game’s turning point.

Solid, dependable, and arguably the best right back around at present; Ivanovic was at his rampaging best against an under strength Newcastle outfit, and provided the cross for Hazard to curl in the opening goal at Stamford Bridge.

Adventurous yet dependable at the back, Liverpool’s young defender is most often used as a left-back, but such is his versatility, he filled in on the right against Arsenal on Saturday, and put in a great shift.

Scored two goals in the first 10 minutes to swing the tie convincingly in Liverpool’s favour, and hardly put a foot wrong at the back. An excellent day for the Slovak.

Fulham’s young defender earns a place in the team of the weekend due to his rock-solid display in the 2-2 draw with Manchester United on Sunday. David Moyes’ side put in a Premier League record 81 crosses, but the 6ft 7in  Burn was not to beaten in the air, clearing 22 of them, with only 18 successfully finding a United player.

The 19-year-old is blossoming into a fine player under Brendan Rodgers, and the England man may well have had a hat-trick against Arsenal! His two goals were a just reward for his superb attacking performance.

It was a  monstrous display from the 23-year-old Chelsea winger on Saturday. Shimming and slaloming past challenge after challenge, Hazard linked up superbly with Samuel Eto’o up top, and was a devilish presence on the left for Chelsea. Bagged a hat-trick, was deservedly named man-of-the-match, and would arguably walk into any team in the Premier League at present.

The Liverpool skipper put in a fine defensive performance in the absence of Lucas. Gerrard’s finely-tuned reading of the game, and boundless passion for the club enabled him to boss midfield and keep Liverpool’s viscous attack flowing throughout.

Another superb showing form the £21m signing; Matic hardly gave Newcastle a sniff on Saturday, and is surely a firm starter in the Blues first XI.

With his strike-partner Luis Suarez getting all the hype, Sturridge’s unbelievable strike record has rather been pushed into the shadows. The England striker has only failed to score three times out of the 17 Premier League matches he has taken part in, and kept up his phenomenal rate with a tidy finish in the Arsenal rout on Saturday.

While Adebayor didn’t have the greatest of games on Sunday against Everton, he did grab the crucial winning goal that took Spurs up to fifth place in the league. Revitalised beyond belief, you feel that if Tottenham have any chance of breaking into the top four this season, it will be largely down the form of the once-marginalizsed Togolese striker.

Goal of the Weekend – Eden Hazard vs. Newcastle

What do you think? Agree with my line-up? Let me know in the comments below…