Manchester United get back to Premier League action when they take on West Brom this weekend. Here’s the starting team we think Moyes will go with for the game

Manchester United have enjoyed a long break from Premier League action but get back down to business when they take on West Brom this weekend.

David Moyes will assess his squad after the international break but it looks as though only striker Javier Hernandez has picked up a knock while away this week.

Chris Smalling came through England’s 1-0 win over Denmark unscathed so he should start at right-back on Saturday, while Rio Ferdinand could partner Nemanja Vidic once again with Jonny Evans still likely to be out with a calf injury.

Marouane Fellaini is likely to partner Michael Carrick in midfield, although Tom Cleverley and Darren Fletcher are also pushing for starts.

It’s in attack where Moyes has really got some decisions to make as he tries to find a way to get the best out of Juan Mata. Unfortunately, with Wayne Rooney fit and expected to start in the ‘hole’ behind Robin van Persie, it seems Mata is once again likely to be pushed out to the wing.

The Spaniard could be joined by Adnan Januzaj in the side if Moyes opts to go with the exciting youngster ahead of Antonio Valencia or Ashley Young.

Here’s the team we think Moyes will go with this weekend: 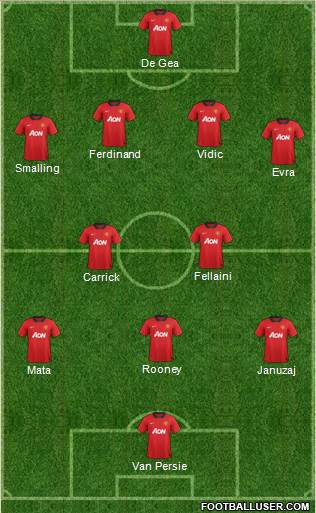 United head into the weekend sitting seventh in the Premier League table, a full 12 points adrift of the top four, after not playing last weekend, so three points are a must if the defending champions want to retain any slim hopes of qualifying for the Champions League next season.