Manchester entertain Liverpool at Old Trafford on Sunday afternoon, here’s the team we think David Moyes will put out.

The United boss confirmed at his press conference earlier today that Rafael is back in contention after recovering from a minor knock picked up during last weeks 3-0 win over West Brom. While the Scot seems to have a soft spot for Chris Smalling, we think the Brazilian defender will be given the nod this weekend.

Jonny Evans is also close to making a comeback from a calf injury but this game might come just too soon after such a long time on the sidelines, so we can see Phil Jones partnering Nemanja Vidic at the back, although Rio Ferdinand is also pushing for a start.

Michael Carrick is certain to start and Marouane Fellaini seems the favourite to join him in midfield, especially if Jones starts at the back.

Nani is fully fit again after recovering from a hamstring tear while Adnan Januzaj will also be hoping to start. However, we think Moyes will go with Antonio Valencia on the right side of the attack with Juan Mata deployed on the left allowing Wayne Rooney to play in the ‘hole’ behind Robin van Persie.

So here’s the team Moyes could go with: 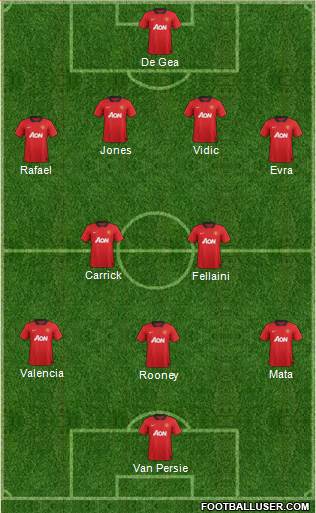 What do you think of our United team? Share your views below.