As we approach the opening of the summer window clubs will be intensifying their efforts in the transfer market so we’ll bring you all the latest news and gossip. Today, Man Utd are linked with Arjen Robben. 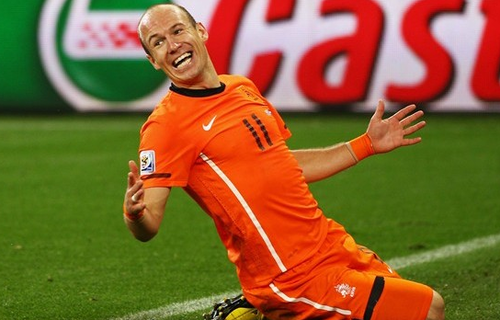 The 30-year-old has been one of the stand-out performers at the World Cup so far with the Dutch attacker following up his double against Spain last Friday with another vital strike during yesterday’s 3-2 comeback win over Australia.

Obviously we didn’t need to see him shine at the World Cup to know what an excellent player he is, as Robben has been one of the best attacking midfielders in Europe over the past 10 years, but it seems his exploits in Brazil are going to lead to interest from Manchester United.

The Express cite reports coming out of Germany that claim new United boss – and current Holland coach – Louis van Gaal wants to take Robben with him to Old Trafford and is ready to test Bayern Munich’s resolve with a huge €50m (£40m) offer.

Interestingly, Robben was the first player van Gaal bought when he took over at Bayern in 2009 when he managed to lure him away from Spanish giants Real Madrid, so United fans will be hoping he’ll be able to work his magic once again.

However, it may not be as simple this time around as Robben recently rejected talk of him moving to United, claiming he’s content at the Alianz Arena and has no intention of leaving after just signing a new contract.

“Manchester United? That’s not an option. I am staying at Bayern Munich. Period.

“And I cannot imagine that Bayern would want to sell me.

“I have only just renewed my contract and we are happy with each other. It would have been a different story had I been unhappy.

“I would have been open to a move then, because I had a great time under Van Gaal at Bayern. He has been very important for my career.

“However, the fact is that I am very happy at my current club.” Robben is quoted as saying by the Express

Obviously things can change quickly in football, but that sounds pretty conclusive. Bayern are unlikely to want to sell either, and while a €50m bid would be hugely tempting for a player who is now 30, they don’t need the money and Pep Guardiola isn’t going to want to lose a key player this summer.

It would certainly be an audacious move if these reports prove accurate and United do submit a formal offer for Robben, and although a deal is highly unlikely to come off, at least it shows United fans that the club are being ambitious in the transfer market this summer and are prepared to spend big to buy the best players.

Van Gaal is expected to be busy this summer as he looks to rebuild a flagging squad that finished seventh under David Moyes last season and if these links to Robben are anything to go by, it could be an exciting few months for the Old Trafford faithful.