FA Cup winners Arsenal take on champions Manchester City in the Community Shield at Wembley on Sunday afternoon. Here’s my predicted line-up for the Gunners.

After a thrilling World Cup over in Brazil, the new domestic season is almost upon us. Live Premier League football returns to us this month but up first is the Community Shield where Arsenal take on Manchester City at Wembley this Sunday.

It’s been a while since we took part in the season curtain raiser but we’ll be back at Wembley to face the Premier League champions after lifting the FA Cup in May. Here is the Arsenal team I think we’ll see play:

Defence – Mathieu Debuchy has impressed in pre-season and he looks to be a solid and dependable replacement for Bacary Sagna at right-back, while Kieran Gibbs should get the nod over Nacho Monreal at left-back.

However, Arsene Wenger has few options in the middle of defence with Per Mertesacker not returning to training until Monday and Thomas Vermaelen on the verge of joining Barcelona, so it looks as though the boss will have no choice but to go with youngster Calum Chambers alongside Laurent Koscielny.

Midfield – With no new defensive midfielder through the door yet, Mikel Arteta is likely to start in the holding role once again. Aaron Ramsey is certain to start and he could be joined by Jack Wilshere just in front of Arteta. Arsene has tested this formation in pre-season and with Mesut Ozil also not available yet, we could see it deployed against City to give us a bit more solidity in the middle of the park.

Attack – Santi Cazorla is almost certain to start and I would like to see him on the left with Alex Oxlade-Chamberlain out on the right. Theo Walcott isn’t fit so The Ox gives us a direct and powerful runner who will cause problems. This would allow Alexis Sanchez to start up front – where he played during the second half against Monaco last weekend – as Olivier Giroud looks well off the pace and Wenger hinted he might not start him this weekend.

So here’s the side I’d go with: 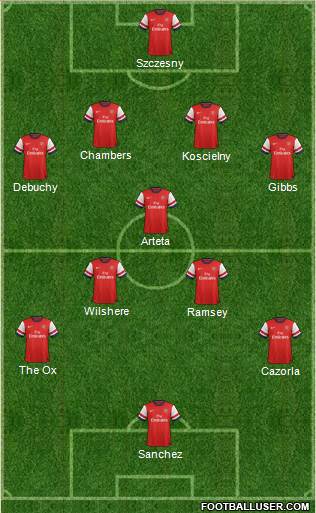 What do you think of my team? Who would you start?