Man Utd kick off the new Premier League season when they take on Swansea City at Old Trafford on Saturday lunchtime. Here is our predicted team for the game:

Manchester United kick off the new Premier League season when they take on Swansea City at Old Trafford on Saturday lunchtime. Here is our predicted team for the game:

Goalkeeper: No question David De Gea will start this match, unless he picks up a late injury. Anders Lindegaard could be leaving which leaves Ben Amos as United’s No.2, but neither are capable of ousting the Spaniard.

Defence: Louis van Gaal is set to try out his new 3-5-2 formation for the first time in a competitive game, but his options at the back are limited. Rio Ferdinand and Nemanja Vidic have both left and so far no new centre-back has been brought in, which means Phil Jones, Chris Smalling and Jonny Evans will make-up the defence.

Midfield: Luke Shaw and Rafael are injured so Antonio Valencia and Ashley Young should fill the full-back roles. Michael Carrick is also out so Darren Fletcher is likely to start alongside Ander Herrera in the middle of the park. Juan Mata will then be deployed in his favoured role just behind the strikers.

Attack: Robin van Persie isn’t likely to feature so captain Wayne Rooney should be partnered by Javier Hernandez up front. Danny Welbeck is also pushing for a start but I think van Gaal will opt for the Mexican.

Here’s how the team will line-up: 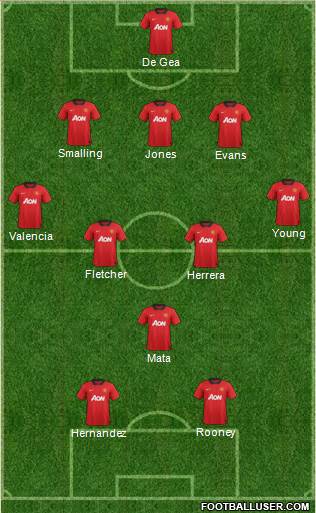 Swansea at home is a good game for van Gaal to kick off his reign as United boss and we should see the former champions get off to a positive start to the new season tomorrow as even without a few first team regulars, this side is more than capable of beating the Welsh outfit.

What do you think of our team? What would be your starting eleven?