Arsenal & Liverpool Do Battle With Mourinho For €23m Brazilian

Chelsea face competition from Arsenal and Liverpool in the race for €23m-rated Brazilian midfielder Anderson Talisca, according to reports today.

The summer transfer window may be closed but managers are already thinking ahead to future transfer windows so we’ll bring you all the latest news and gossip. Today, Chelsea face competition from Arsenal and Liverpool for Anderson Talisca. 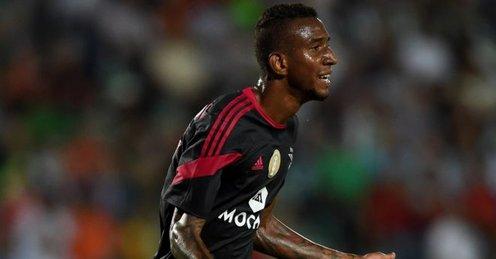 Chelsea face competition from Arsenal and Liverpool in the race for €23m-rated Brazilian midfielder Anderson Talisca, according to reports.

Having made his name with Brazilian Serie A side Bahia, Talisca made a £3m move to Benfica in the summer and the 20-year-old has settled in to life in Portugal superbly, with the midfielder scoring 6 goals in his first seven appearances to help his new club to the top of the Primeira Liga standings.

His impressive form caught to eye of Jose Mourinho with reports suggesting the Chelsea boss is keen on luring him to Stamford Bridge to link-up with compatriots Willian, Oscar, Filipe Luis and Ramires in West London.

However, it appears the Blues will now face stiff competition from rivals Arsenal and Liverpool, with the Daily Star reporting that the duo are also showing a keen interesting in bringing the 6ft 2″ midfielder to the Premier League.

The newspaper suggests that both Arsene Wenger and Brendan Rodgers sent scouts to watch Talisca in action during Benfica’s 4-0 win over Arouca on Sunday, and the representatives would have been impressed with what they saw as the player netted late on in the game to seal a comfortable win and maintain their unbeaten start to the season.

Understandably Benfica aren’t going to want to lose the highly-rated midfielder so soon after signing him but with a €23m buy-out clause believed to be written into his contract, they would have little option but to cash-in and turn a quick profit if a club were to match that figure.

However, it remains to be seen whether the likes of Chelsea, Arsenal or Liverpool would be willing to pay that kind of money for a player who has only made seven appearances in European football and is yet to prove himself over any significant period of time.

If any of the English trio do decide to formalise their interest, I wouldn’t be surprised if they waited until next summer to see how the youngster fared over the course of an entire season before agreeing to pay over €20m for his services.