Liverpool will look to get back on track in the Champions League when they take on Real Madrid at Anfield on Wednesday night. Here is a predicted line-up:

Liverpool will look to go one step closer to securing qualification to the knockout stages of the Champions League when they take on Real Madrid at Anfield on Wednesday night. Here is a predicted line-up:

Goalkeeper: Simon Mignolet is the established first choice keeper at Liverpool so no doubt he’ll start unless he picks up a late knock.

Defence: Brendan Rodgers could decide to mix things up at the back after a poor showing against QPR. Javier Manquillo could come back in at right-back for Glen Johnson while Alberto Moreno is expected to be recalled having sat out the win at Loftus Road. With Mamadou Sakho still injured, Dejan Lovren is likely to continue his partnership with Martin Skrtel in the middle of defence.

Midfield: Rodgers could also bring Joe Allen back in alongside Steven Gerrard with Jordan Henderson sitting just in front of the duo to give the Reds a more solid base in midfield to counter the attacking threat of Madrid. This would see Emre Can drop out after he made his return from injury on Sunday.

Attack: Philippe Coutinho is expected to be recalled after impressing from the bench against QPR with Adam Lallana the one likely to make way. Despite calls for Mario Balotelli to be dropped, the Italian is expected to once again lead the line in the absence of Daniel Sturridge with Raheem Sterling offering support in attack.

So this is how I think Liverpool will line-up tomorrow: 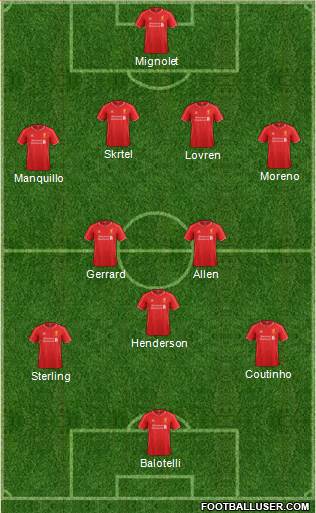