Goalkeeper: After handing Petr Cech a rare start in Europe, Mourinho has confirmed that Thibaut Courtois will return between the sticks this weekend.

Defence: Cesar Azpilicueta serves a ban following his sending off against Crystal Palace last weekend so Filipe Luis comes in at left-back. Kurt Zouma will also drop out with Gary Cahill restored alongside John Terry at the back.

Midfield: Cesc Fabregas has forged a superb partnership with Nemanja Matic following his move from Barcelona and unless Ramires passes a late fitness test and Mourinho opts to add more steel to his side, these two should continue in front of the defence.

Attack: Andre Schurrle has been suffering from illness in recent weeks so he might be deemed fit enough to start, which should see Willian keep his place alongside Eden Hazard and Oscar in attack.

The big question mark is who starts up front. Loic Remy is out with a groin injury but Mourinho has confirmed that Diego Costa has a ‘little chance’ of being fit – despite categorically ruling him out on Tuesday. I think Jose is playing games here and with Costa taking part in light training on Friday, I wouldn’t be surprised to see him start on Sunday.

So here’s how I think Chelsea will line-up this weekend: 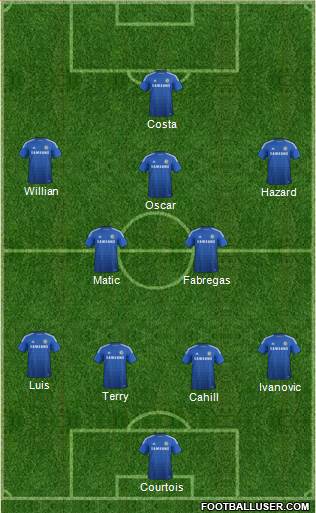