Tottenham will be hoping to get back to winning ways when they take on Aston Villa at Villa Park on Sunday. Here is the team news and predicted line-up

Tottenham Hotspur take on Aston Villa at Villa Park on Sunday afternoon. Here is the team news and predicted line-up that Mauricio Pochettino will select.

Goalkeeper: Michel Vorm got a rare start in midweek but will likely drop back to the bench with Hugo Lloris recalled in goal.

Defence: Kyle Walker remains out with a pelvic injury and although Kyle Naughton performed well against Brighton on Wednesday, Eric Dier is favourite to start at right-back. Danny Rose should come back in for Ben Davies while skipper Younes Kaboul is expected to start alongside Jan Vertonghen at the back.

Midfield: Etienne Capoue faces a late fitness test on a knee problem which ruled him out in midweek but he’s expected to shake it off to start in midfield and should be partnered by Ryan Mason with the youngster making the first team shirt his own in recent weeks.

Attack: Aaron Lennon is a big doubt after being withdrawn at half time on Wednesday so Eric Lamela should start on the right while Harry Kane has surely played himself into Pochettino’s starting line-up with another goal against Brighton. Nacer Chadli could be the man to make way which would see Christian Eriksen moved out to the left wing. Emmanuel Adebayor is expected to replace Roberto Soldado up front.

Here is how we think Spurs will line-up on Sunday: 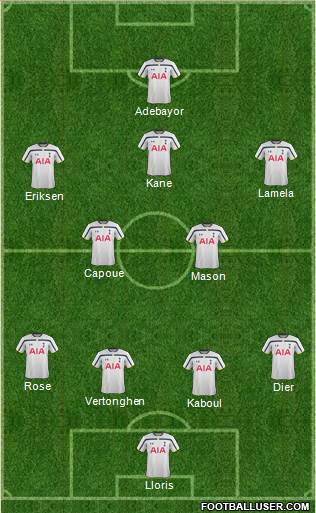