With Arsenal set to welcome former champions Manchester United to the Emirates on Saturday, Gooner Mac gives us his predicted starting line-up for the game:

With Arsenal set to welcome former champions Manchester United to the Emirates on Saturday evening, Gooner Mac gives us his predicted Arsenal starting line-up for the game:

Goalkeeper: With David Ospina still nursing a thigh injury that’s plagued him since the World Cup, Wojciech Szczesny is certain to start in goal.

Defence: We have our problems at the back but with Laurent Koscielny not expected back for at least another two weeks and Mathieu Debuchy still some way off returning, so Arsene Wenger has little choice but to stick with an unchanged back four. This means Nacho Monreal will continue at centre-back with Calum Chambers on the right.

Midfield: Midfield is an area I can see us making a couple of changes. Mikel Arteta is due to return from injury and should replace Mathieu Flamini while the in-form Jack Wilshere is expected to come in having started on the bench against Swansea last time out. Aaron Ramsey has been well below the standards he set last season so I wouldn’t be surprised to see him drop out this weekend.

Santi Cazorla should continue on the left while Alex Oxlade-Chamberlain is likely to keep his place on the right as Theo Walcott has played just 10 minutes of first team football in 10 months, so is likely to be among the subs again on Saturday.

Attack: Alexis Sanchez has been reveling in his new role behind Danny Welbeck in recent games so I see no reason why Wenger would want to change things in attack. Welbeck was forced off with a minor hamstring problem for England on Tuesday night but he’s expected to shake it off and be passed fit to face his former side. Olivier Giroud is back in the squad but after three months out, I think he’ll be on the bench.

So this is the line-up I think we’ll see Wenger go with against United: 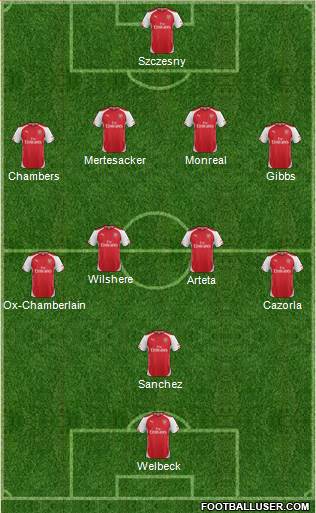