Arsenal will look to continue their recent form when they take on Liverpool at Anfield on Sunday. Here is the side Gooner Mac thinks Arsene Wenger will select:

Arsenal will be looking to continue their recent form when they take on Liverpool at Anfield on Sunday afternoon. Here is the side Gooner Mac thinks Arsene Wenger will select:

Goalkeeper: Wojciech Szczesny has returned to full fitness after a month out with a pelvic injury and has regained the No.1 shirt so I expect the Pole to once again start on Sunday.

Defence: Laurent Koscielny continues to be sidelined by a calf injury but the good news is that Calum Chambers returns from suspension and should start alongside Per Mertesacker at the heart of defence. Mathieu Debuchy will likely revert to right-back with Hector Bellerin dropping out. Nacho Monreal faces a late fitness test but I suspect Kieran Gibbs will start on the left regardless.

Midfield: Arsene has major problems to deal with in the center of the park with Mikel Arteta, Jack Wilshere and Aaron Ramsey all unavailable through injury. Alex Oxlade-Chamberlain is expected to pass a late fitness test and should line-up alongside Mathieu Flamini and Santi Cazorla in midfield, otherwise Francis Coquelin could be the man to step in and make his first Premier League start of the season having had his loan spell at Charlton cancelled.

Attack: Theo Walcott faces a late test after returning to training on Thursday following a month out with a groin injury, but I think the best we can hope for is a place on the bench for the attack. Therefore, I think Wenger will stick with the front trio of Danny Welbeck, Olivier Giroud and Alexis Sanchez that were so impressive against Newcastle last weekend. 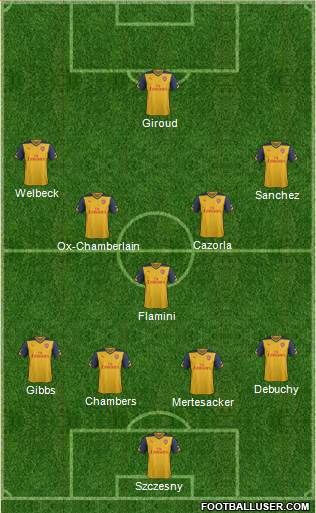