Chelsea will look to tighten their grip at the top of the table when they entertain Man City on Saturday. Here is the side I think Jose Mourinho will select:

Chelsea will be looking to tighten their grip at the top of the table when they entertain Manchester City at Stamford Bridge on Saturday evening. Here is the side I think Jose Mourinho will select:

Goalkeeper: Thibaut Courtois was in inspired form against Liverpool on Tuesday night so the Belgian is once again likely to keep Petr Cech out the team.

Defence: Mourinho will have to check on the fitness of Filipe Luis after the full-back was forced off with a knock on Tuesday, so Cesar Azpilicueta is expected to come back in for the Brazilian. Kurt Zouma was a surprise starter in midweek but I think we’ll see Gary Cahill recalled alongside John Terry at the back while Branislav Ivanovic should shake off a cut foot to start on the right.

Midfield: Cesc Fabregas may be moved further forward if he recovers from an injury he picked up in midweek, with John Obi Mikel coming in alongside Nemanja Matic to offer more defensive stability in front of the defence, as this is a tactic Mourinho has adopted in many of the games against the top sides this season.

Attack: With Fabregas further forward we could see Oscar drop to the bench as Eden Hazard and Willian should keep their places in attack. However, the big question mark is whether Diego Costa will be available for selection. The Spaniard is contesting an FA misconduct charge and if that appeal fails on Friday, then the striker will be suspended for at least three games starting this weekend. Didier Drogba is on stand by to fill in up front. 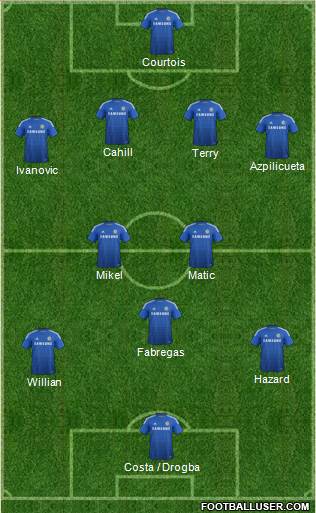