Chelsea will look to extend their lead at the top when they take on Burnley at Stamford Bridge on Saturday. Here is the side I think Jose Mourinho will select:

Chelsea will look to extend their lead at the top of the Premier League table when they take on Burnley at Stamford Bridge on Saturday. Here is the side I think Jose Mourinho will select::

Goalkeeper: Thibaut Courtois was restored to the starting eleven against PSG on Tuesday having seen Petr Cech put in an excellent display against Everton last week. It’s certainly a selection dilemma for Mourinho, but I think we’ll see the young Belgian keep his place.

Defence: Mourinho has no fresh injury worries to contend with at the back but he’s likely to take the opportunity to mix things up. This could see Kurt Zouma given another chance to impress alongside John Terry with Gary Cahill dropping out, while Filipe Luis should come in for Cesar Azpiliceuta at left-back after recovering from injury.

Midfield: Cesc Fabregas should be moved into his deeper role alongside Nemanja Matic on Saturday having been deployed slightly further forward against PSG. This would see Ramires miss out, which would be unfortunate as he’s been in excellent form lately.

Attack: New signing Juan Cuadrado made his full debut against Everton but reverted to the bench in midweek. However, I think with Willian carrying a slight knock, we’ll see the Colombian return to the starting eleven on Saturday. Oscar should also be recalled after being named on the bench last time out but Eden Hazard and Diego Costa should keep their places in attack. 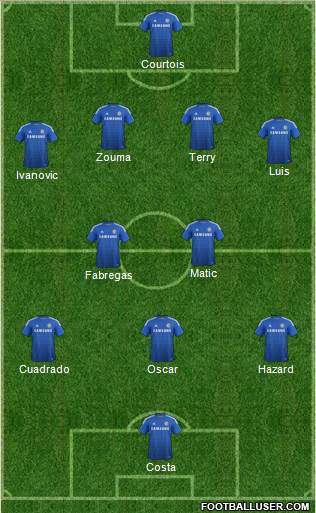