Man Utd Pushing Ahead With Deal For €45m Midfielder, Player Keen On Move

Manchester United are pushing ahead with a deal for €45m-rated midfielder Axel Witsel and the player is believed to be keen on a move to Old Trafford.

The January transfer window is now closed but that won’t stop the newspapers from speculating ahead of the summer so we’ll bring you all the news and gossip. Today, Manchester United are linked with Axel Witsel…. 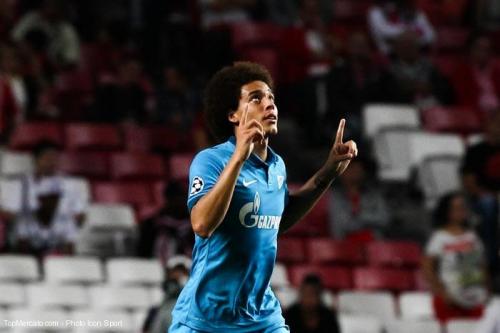 Manchester United are pushing ahead with a deal for €45m-rated midfielder Axel Witsel and the player is believed to be keen on a move to Old Trafford, according to reports.

Witsel made his name at Standard Liege having come through the clubs youth academy and after an impressive season at Benfica, he sealed a big-money move to Zenit Saint Petersburg in 2012.

The Belgian international has continued to impress in Russia and it appears he’s now attracting interest from some of Europe’s top clubs with the Metro citing reports coming out of Italy that claim Manchester United have joined Juventus in the race for his signature.

The newspaper suggests that Louis van Gaal has made the 26-year-old a top summer target and is now pushing ahead with a deal having sent scouts to keep a check on the midfielder on several occasions this season.

The news comes shortly after Witsel revealed he could leave Zenit at the end of the season and the Metro claim he admitted he’s be keen on making a move to Old Trafford – although they don’t have any direct quotes to back this statement up.

van Gaal did recently admit that a new midfielder was his priority this summer and Witsel would be an interesting option as he has all the attributed needed to be a success in the Premier League. He’s tall, strong, quick and chips in with the odd goal, so he’s certainly bring a new dimension to the United team.

However, it’s believed Zenit would demand €45m (£32.5m) for his signature, so United would have to be prepared to dig deep if they want to lure the Belgian international to Manchester at the end of the season.