The January transfer window is now closed but that won’t stop the newspapers from speculating ahead of the summer so we’ll bring you all the news and gossip. Today, Arsenal and Chelsea are linked with Pierre-Emerick Aubameyang… 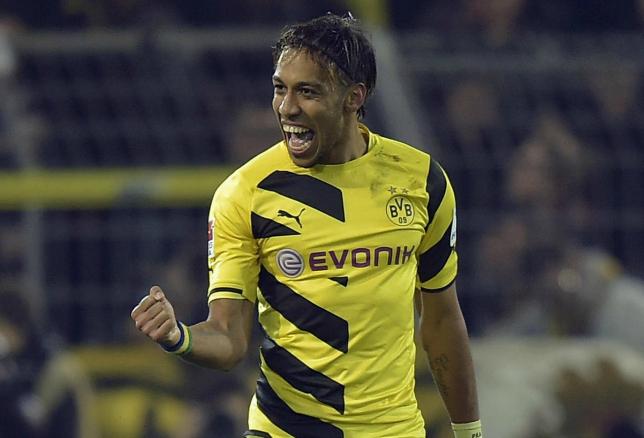 Arsenal and Chelsea are lining-up bids for Pierre-Emerick Aubameyang as Borussia Dortmund get ready to cash-in on the €40m-rated attacker this summer, according to reports.

Aubameyang has been on the books at Dortmund since joining from Saint-Etienne in 2013 and although he’s not always been considered as a permanent fixture in Jugen Klopps starting eleven, he’s still managed to score 22 goals in 54 league games so far.

The pacey forward has attracted interest from England with the Express reporting that Arsenal and Chelsea are keeping tabs on his availability while Liverpool are also understood to be watching developments closely.

The newspaper suggests that the Premier League trio are all lining-up bids for the 25-year-old at the end of the season after sending scouts to monitor his progress in recent months.

Dortmund are keen to keep hold of the Gabon international but are resigned to losing some of their key players if they miss out on qualifying for the Champions League next season – which looks likely considering the club are currently languishing down in 12th place in the Bundesliga table.

Aubameyang is seemingly going to be in demand and the Metro claim that the German outfit will cash-in if a €40m (£30m) offer is put on the table, with the Gunners believed to be considered the front-runners.

It remains to be seen whether the likes of Arsenal, Chelsea or indeed Liverpool will be willing to pay that kind of money but Aubameyang would be an exciting addition if any of the clubs were able to get a deal agreed.

He’s known for his searing pace and while he’s predominantly used as a right-sided attacker, he’s also capable of playing on the left or through the middle so he’d provide plenty of options to his new club.

Arsene Wenger could be on the look out for attacking reinforcements this summer with Lukas Podolski set for a permanent move away, while Jose Mourinho is expected to bring in a replacement for Didier Drogba once his deal expires at the end of the season, and it appears that Aubameyang is on both managers radar.