Louis van Gaal confirmed that Robin van Persie is facing a spell on the sidelines with an ankle injury but Michael Carrick has returned to full training. 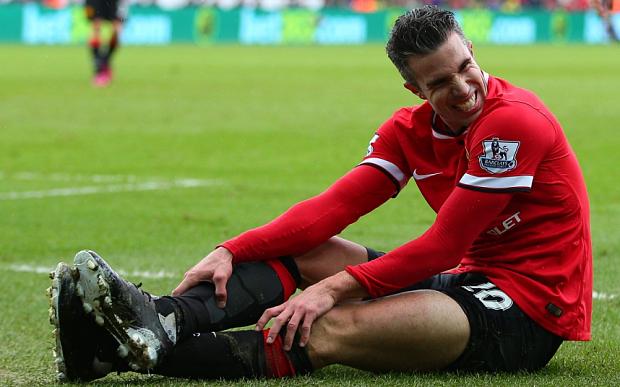 Manchester United will look to get their season back on track when they entertain Sunderland at Old Trafford on Saturday afternoon.

Unfortunately the Dutchman confirmed that Robin van Persie is facing a lengthy spell on the sidelines after suffering an ankle injury during United’s 2-1 defeat to Swansea City last weekend.

van Persie picked up the problem after falling awkwardly when trying to make a late cross and left the Liberty Stadium on crutches and wearing a protective boot on his right leg.

Having had scans earlier this week, van Gaal has now revealed that his compatriot is certain to miss the visit of Sunderland and while he refused to give an exact time-scale on his recovery, he did say the striker will be out for at least two weeks.

“He [Robin] is the only injured player. He has an ankle injury. We have to wait and see how long that shall take.”

“It’s not heavy but it’s not one or two weeks.” van Gaal told ManUtd.com

The newspapers speculated yesterday that van Persie will be out for around four weeks which means he’ll also miss the FA Cup clash against Arsenal next Monday, as well crucial Premier League games with Liverpool and Tottenham next month.

The news will come as a huge blow as although van Persie hasn’t been firing on all cylinders this season he is still United’s top scorer. In his absence, van Gaal is likely to turn to Radamel Falcao and the Colombian will now be given a run in the team to try and finally make an impact following his loan move from Monaco last summer.

While van Persie’s injury comes as a blow, there was better news regarding Michael Carrick with van Gaal confirming that the veteran midfielder has returned to full training after suffering a calf injury just over a month ago.

However, with just one days full training under his belt, Carrick is unlikely to play any part against Sunderland with van Gaal hinting he could play for the under-21’s first to gain match fitness. He continued:

“He [Michael] is very experienced and he can play in a very important position,”

“But he also needs match rhythm. He trained only one time with us, with the group, so he needs to also play in the second team.”

Man Utd head into the weekend action sitting fourth in the Premier League table after last weeks defeat in Wales so they’ll be hoping to put the pressure on Arsenal by reclaiming third with victory tomorrow.