Liverpool will get back to Premier League action when they take on Man City at Anfield on Sunday afternoon. Here is the side I think Brendan Rodgers will pick:

Liverpool will get back to Premier League action when they take on Manchester City at Anfield on Sunday afternoon. Here is the side I think Brendan Rodgers will pick:

Goalkeeper: Simon Mignolet has been in decent form of late and with Brad Jones still injured, it’s certain he’ll start again this weekend.

Defence: There has been no update on the fitness of Mamadou Sakho but with the Frenchman missing Thursday’s trip to Turkey with a hip injury, we can only assume he’ll remain a doubt for Sunday so Dejan Lovren could continue alongside Martin Skrtel in defence. Emre Can may drop back into the back three after replacing Jordan Henderson in midfield last night with Kolo Toure likely to miss out.

Midfield: Henderson didn’t travel to Istanbul in midweek due to a minor ankle injury but he’s expected to be passed fit to face City. Steven Gerrard is still struggling with a hamstring problem and is likely to sit this one out along with Lucas Leiva so Joe Allen could continue in midfield. Lazar Markovic will be fresh after missing the Besiktas game so he should start in place of Jordon Ibe on the right wing.

Attack: Daniel Sturridge was withdrawn in extra-time last night but he’s expected to be fit to face City. The experiment with Mario Balotelli partnering him in attack didn’t work so I think we’ll see the Italian drop back to the bench with Philippe Coutinho recalled after his rest. Raheem Sterling wasn’t at his best last time out but he’s almost certain to keep his place in attack this weekend. 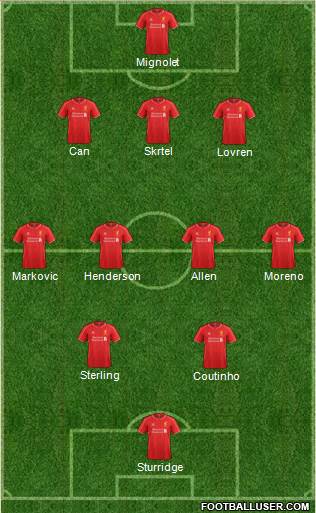