Man City will look to close the gap at the top of the table when they face Liverpool at Anfield on Sunday. Here is the side I think Manuel Pellegrini will pick

Manchester City will look to close the gap at the top of the table when they face Liverpool at Anfield on Sunday afternoon. Here is the side I think Manuel Pellegrini will select:

Goalkeeper: No decision for Pellegrini to make here, Joe Hart is a cert to start in goal.

Defence:  However, the City boss may make a couple of changes at the back. Gael Clichy could find himself left out after his sending off against Barcelona in midweek with Alexandre Kolarov coming in at left-back. Mangala could also replace Demichelis alongside Vincent Kompany at the back but Pablo Zabaleta is expected to keep his place at right-back ahead of Bacary Sagna.

Midfield: Yaya Toure will return from European suspension to start in midfield with James Milner expected to make way, while Fernandino may come in to replace Fernando alongside the powerful Ivorian international.

Attack: David Silva is certain to start in attack and he’s likely to be joined by Samir Nasri. Pellegrini has gone with both Sergio Aguero and Edin Dzeko in recent games but if he opts to play two strikers again at Anfield, he may ask Aguero to drop slightly deeper to help out a bit more in the midfield area and find clever pockets of space in front of the Liverpool defence.

Here is how I think we’ll see Man City line-up: 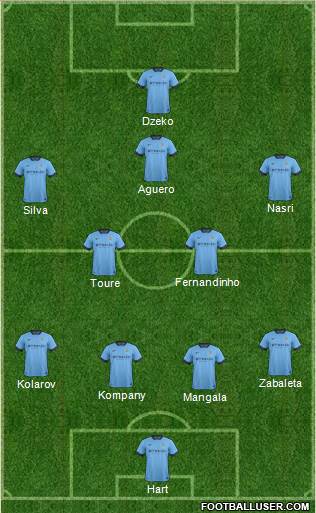