Man Utd will look to regain third spot in the table when they take on Newcastle on Wednesday night. Here’s the starting eleven I think Louis van Gaal will pic

Manchester United will look to regain third spot in the table when they take on Newcastle at St James’ Park on Wednesday night. Here’s the starting eleven I think Louis van Gaal will go with:

Goalkeeper: No decision for van Gaal to make here, Victor Valdes is a decent back-up but David De Gea is certain to start in goal tomorrow.

Defence: Luke Shaw is back in contention after being rested for Saturday’s 2-0 win over Sunderland. If van Gaal recalls the youngster then Marcos Rojo should move back into the center of defence. Phil Jones could also be set for a recall meaning that Jonny Evans and Chris Smalling could both make way. Rafael remains out of favour so Antonio Valencia should retain his place at right back.

Midfield: Michael Carrick returned to the bench at the weekend but van Gaal has confirmed he’s still not fit enough to start, so Daley Blind will continue in the holding role in midfield. Ander Herrera appears to have played his way into van Gaal’s first team plans in recent games so he could continue in midfield while Adnan Januzaj may get a recall in place of Ashley Young. Angel Di Maria is expected to keep his place despite some disappointing form lately.

Attack: Robin van Persie is still out with an ankle injury so Radamel Falcao is likely to keep his place up front and start alongside Wayne Rooney – who will be hoping to build on the two goals he scored against Sunderland. 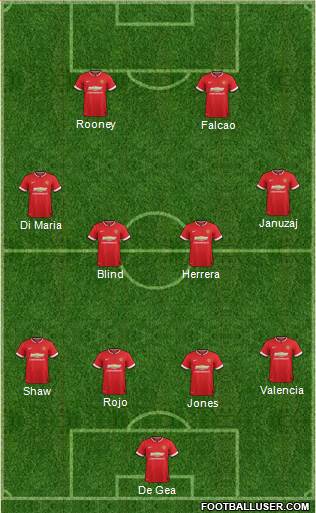