Arsenal have statistically had the best holding midfielder in the entire Premier League since the turn of the year when Francis Coquelin returned to the side. 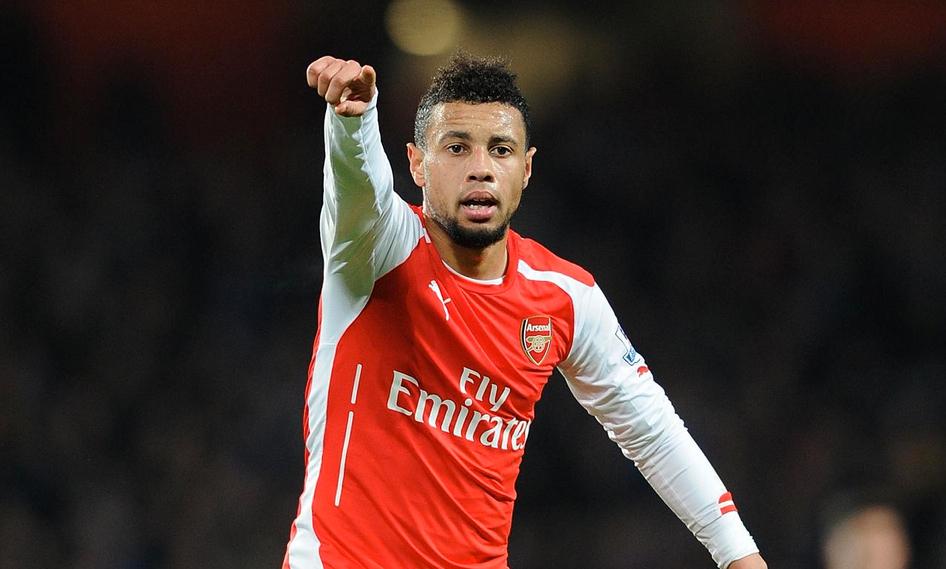 The majority of Arsenal fans have been crying out for Arsene Wenger to sign a top class defensive midfielder in recent transfer windows.

I myself have lambasted the boss for failing to fill this very obvious hole in the squad over the past 18-24 months. However, since the turn of the year, Arsenal have statistically had the best holding midfielder in the entire Premier League.

Arsenal are known for producing young talent. talkSPORT recently revealed the top European football clubs for producing the most players and we rank a very respectable 6th on the list. However, Coquelin was never expected to be one of the success stories.

The Frenchman joined the club as a 17-year-old and having failed to make the breakthrough, he was heading for the exit door this summer when his contract was due to expire.

But since being recalled from his loan spell at Charlton in late December following injuries to Mathieu Flamini, Mikel Arteta and Aaron Ramsey, Francis Coquelin has taken his chance with both hands and he’s made the holding role his own with a series of dominant displays in front of the back four.

His performance away at Manchester City was sensational and his return to the first team has coincided with Arsenal’s upturn in form which has seen us rise to third place in the Premier League following 8 wins from 10 games.

Coquelin has brought all the attributes we’ve been missing. He’s quick over the ground, loves to defend, reads the game well and as these stats below show, he’s made more interceptions and tackles, and won more duels, than any other player in the league. 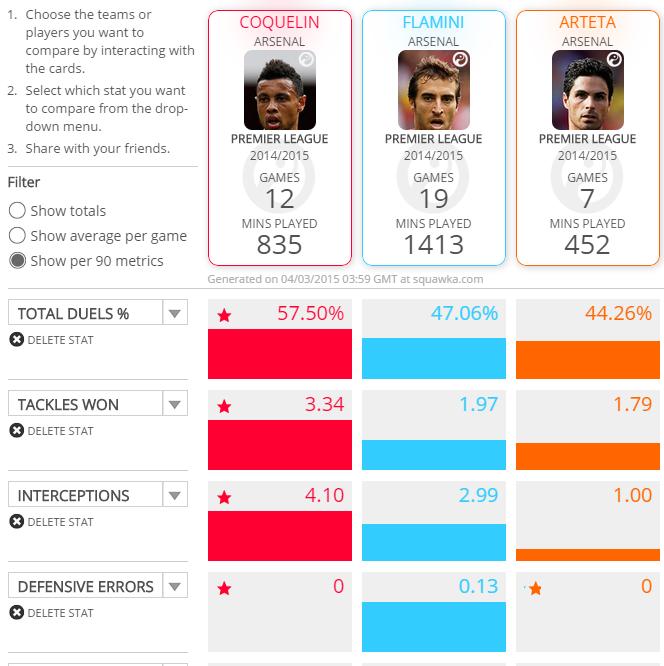 Even when compared to Nemanja Matic – who was widely regarded as the best defensive midfielder in the league during the first half of the season – Coquelin still comes out on top in all but one category. 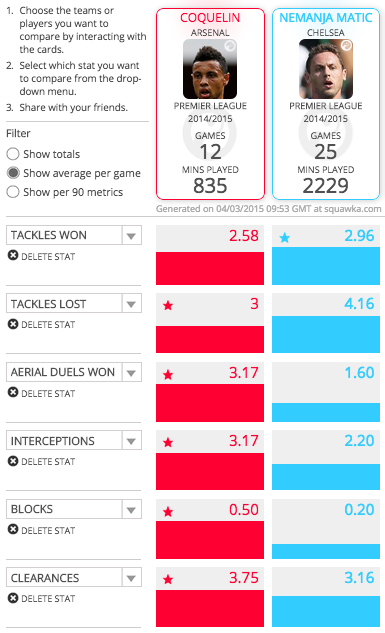 So have Arsenal found the answer to their defensive midfield problems at long last? I certainly think Coquelin has done enough to warrant the new four year deal he signed last month and if he continues to show this kind of form until the end of the season, the DM role is his to lose.

The stats are hard to argue against, but if you ask most football fans who they’d prefer – Matic or Coquelin – I still think most would pick the Chelsea man. We shouldn’t forget that Coquelin showed he’s still got a way to go after a poor showing against Monaco in the Champions League.

However, the 23-year-old has improved dramatically over the last 12 months so if he keeps improving at that rate, he’ll be a world class defensive midfielder, no question.

I still think Wenger needs to bring in another holding midfielder this summer as we need depth and competition in that area, but if Francis keeps up his form of the last few months then no matter who we may sign this summer, he’s going to have a job at displacing him.