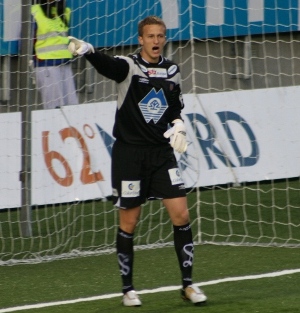 Manchester United struggled miserably to find a replacement for Peter Schmeichel when the Dane left in 1999, and now Sir Alex Ferguson must find a replacement for the Dutch Edwin van der sar as he seems set for retirement at the age of 40.
Their new £3.5 million signing of Anders Lindegaard will hopefully be a shortcut to the the route of goalkeepers that Ferguson had to take when Schmeichel left.
Ferguson will be hoping that Lindegaard is not another van der Gouw, Bosnich, Taibi, or Ricardo, but rather a strong and reliable goalkeeper, who can be the safety net behind the defenders. Someone who will not make mistakes consistently, but who will be a calm and steady influence that a young team needs. No doubt that Ferguson has seen this player play – unlike the Bebe signing.
Manchester United goalkeeping legend Schmeichel doesn’t believe that Lindegaard is good enough for his former club however.

When asked whether his compatriot Lindegaard was of sufficient quality to play for England’s biggest club, h replied

“Too many goalkeepers have been through, in and out of the doors at Manchester United, and the general perception is, for this team to play well and win trophies, that position has to be [filled by] someone who is of the very, very highest quality but also the right experience.”

Lindegaard won’t be too pleased hearing this, as Schmeichel was the young Dane’s boyhood hero. However, criticism of him should only want him to prove the critics wrong, and strive to become better. He has already uprooted the Stoke goalkeeper Thomas Sorensen as Danish number 1 after impressing at club level for Aalesunds, and will be hoping to do the same at United.

Tell me what you think!
Thanks to http://www.dbs-football.blogspot.com/ for this post.