Arsenal booked their place in the semi finals of the FA Cup with a 2-1 victory over Manchester United at Old Trafford on Monday night. Here are player ratings 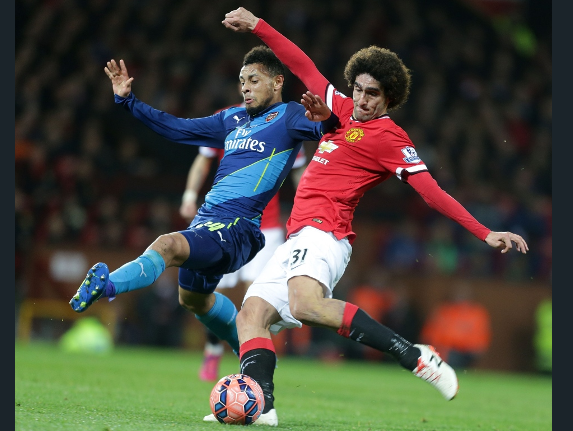 Arsenal booked their place in the semi finals of the FA Cup with a 2-1 victory over Manchester United at Old Trafford on Monday night.

Nacho Monreal opened the scoring with a neat finish before Wayne Rooney levelled things up with a fine header in the 29th minute. However, Danny Welbeck came back to haunt his former club as he grabbed a second half winner to sent the Gunners back to Wembley.

De Gea 8/10 | United’s best player once again. Stunning saves to deny Cazorla and Sanchez in the second half.

Valencia 5/10 | Caught out for Arsenal’s opening goal and his short back-pass lost United the game.

Smalling 5/10 | Also caught napping for the Monreal strike and missed a great chance to grab a goal.

Rojo 6/10 | Looked more comfortable in the middle in the first half than he did in the second when he was at left-back.

Shaw 5/10 | Struggled against Oxlade-Chamberlain. Hauled off at half-time.

Blind 7/10 | Had a decent game, especially in the first half. Used the ball well.

Herrera 5/10 | Very disappointing. Made little impression in the game before being replaced at the break.

Di Maria 5/10 | Lovely cross for the Rooney goal but stupidly got himself sent off for diving and grabbing at the referee.

Fellaini 7/10 | A real handful but ruined his display with persistent fouling. Lucky to stay on the pitch.

Young 7/10 | Gave Bellerin a tough time but his final ball was lacking.

Rooney 7/10 | Excellent movement and finish for the goal. Worked hard up front.

Szczesny 6/10 | Looked nervous. Distribution was awful but made a few routine saves.

Bellerin 6/10 | Given a tough time by Young. Early booking left him with a tightrope to walk.

Mertesacker 7.5/10 | A composed display by the experienced German international.

Koscielny 7/10 | At fault for the Rooney goal as he was far too static and gave him too much space but otherwise excellent.

Monreal 7.5/10 | A superb shift from the increasingly reliable Monreal.

Coquelin 9/10 | Outstanding. The young Frenchman battled well against Fellaini and broke up United attacks all game.

Cazorla 7/10 | Kept calm in possession when under pressure. Almost got on the score-sheet.

Oxlade-Chamberlain  7.5/10 | Great work to set up the opening goal and his direct running caused problems. Went off injured.

Ozil 7.5/10 | Did well in the build up to the Monreal goal and used the ball well throughout the game.

Alexis 8/10 | Almost wrapped things up with a late third but was denied by De Gea. Never stopped working and closing down.

Welbeck 7.5/10 | His hard work paid off as he grabbed the winner by pouncing on a slack back pass from Valencia.