Liverpool midfielder Lucas Leiva has uploaded a video of him training as he closes in on making a comeback from a long-term groin injury. Watch the video here 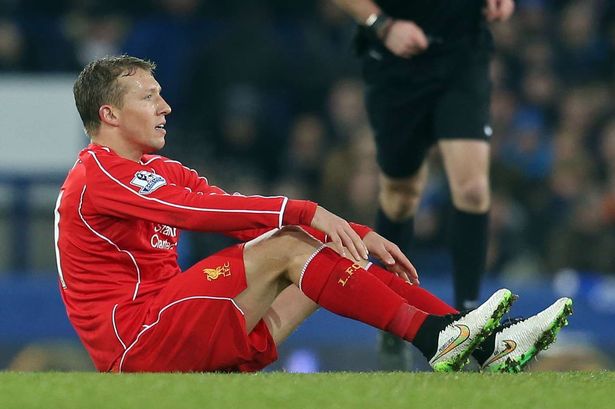 Liverpool midfielder Lucas Leiva has uploaded a video of him training as he closes in on making a comeback from a long-term groin injury.

Leiva limped out of last month’s 0-0 draw at Everton after suffering a groin injury and has been forced to sit on the sidelines for six weeks as Liverpool have gone on an excellent run that’s seen them move in on the top four in the league.

However, the Brazilian international appears close to making his comeback as he’s uploaded a video to Instagram of him being put through his paces by the Liverpool coaches at Melwood.

There’s been no word from Brendan Rodgers on when the 28-year-old is expected to return to full training but he can’t be too far away judging from the footage below while an accompanying message says ‘not long now’, suggesting he’s set to make his return to action.

Leiva’s return will be another major injury boost to the Reds as they head into the business end of the season still aiming to qualify for the Champions League and lift the FA Cup.

But the South American may find it difficult to regain his first team place straight away. Steven Gerrard is now back to full fitness after seven weeks our with a hamstring injury while Joe Allen should return against Swansea tonight after shaking off a minor hip injury.

The Welshman has performed extremely well in recent weeks alongside Jordan Henderson so there’s certainly going to be intense competition for places in the middle of the park during the closing stages of the season and it will be interesting to see who Rodgers sees as his first choice midfield pairing.