Arsenal and Manchester United players have featured heavily in the WhoScored Premier League Team of the Week for gameweek 29. Check out the chosen eleven here

Arsenal and Manchester United players feature heavily in the WhoScored Premier League Team of the Week for gameweek 29.

Each week, WhoScored compile ratings for every player based on unique statistical algorithms which are calculated live during the game with over 200 individual stats going towards each score.

The Gunners eased to a 3-0 victory over West Ham at the Emirates on Saturday afternoon so it’s no surprise to see two of Arsene Wenger’s men make the cut.

Laurent Koscielny was a rock at the back in guiding Arsenal to a clean sheet while Aaron Ramsey grabbed a goal and an assist to cap an excellent all-round performance that earned him a score of 9.01 – making the Welshman the second highest scorer for gameweek 29.

Man Utd also secured a 3-0 victory over Tottenham at Old Trafford on Sunday afternoon and two of Louis van Gaal’s squad were also named in the Team of the Week.

Phil Jones booked his place in the side with a score of 8.39 after marshalling United to a clean sheet, while Marouane Fellaini made the cut after getting himself on the score-sheet with a well-taken opening goal.

However, while Arsenal and United players make up four of the eleven, Aston Villa have three representatives after their impressive 4-0 victory over Sunderland with Leandro Bacuna, Gabby Agbonlahor and Player of the Week Christian Benteke all making the cut.

Here’s the WhoScored  Team of the Week: 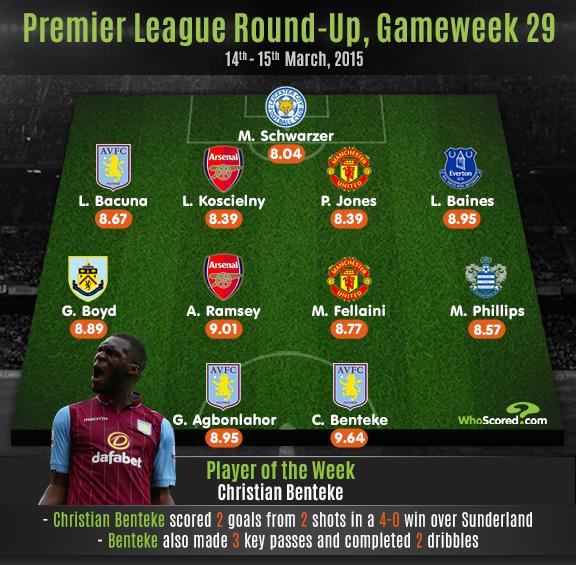