Harry Kane has been handed his first senior England call-up after Roy Hodgson announced his latest 24-man squad this afternoon.

England take on Lithuania next Friday night in their Euro 2016 Group E qualifier before taking on Italy in a Friendly the following Tuesday and Hodgson has been in front of the media to name his squad today.

The big news is that Tottenham striker Harry Kane has been handed a call up after his sensational form has seen him score 16 goals in 25 Premier League games this season.

Kane joins fellow Spurs team mate’s Andros Townsend and Kyle Walker in the squad but there is no place for full-back Danny Rose, despite his consistent form this campaign.

Manchester United lead the way once again with 5 representatives in the 24-man squad with Luke Shaw, Phil Jones, Chris Smalling and Michael Carrick joining Wayne Rooney in being named in the squad.

Chelsea have just one representative in Gary Cahill while Evrton trio Ross Barkley, Leighton Baines and Phil Jagielka keep their places despite the Toffees disappointing domestic form this season.

Notable absentees are Ryan Mason, Saido Berahino, Ryan Bertrand and Danny Ings while the likes of Jack Wilshere and Alex Oxlade-Chamberlain miss out through injury. 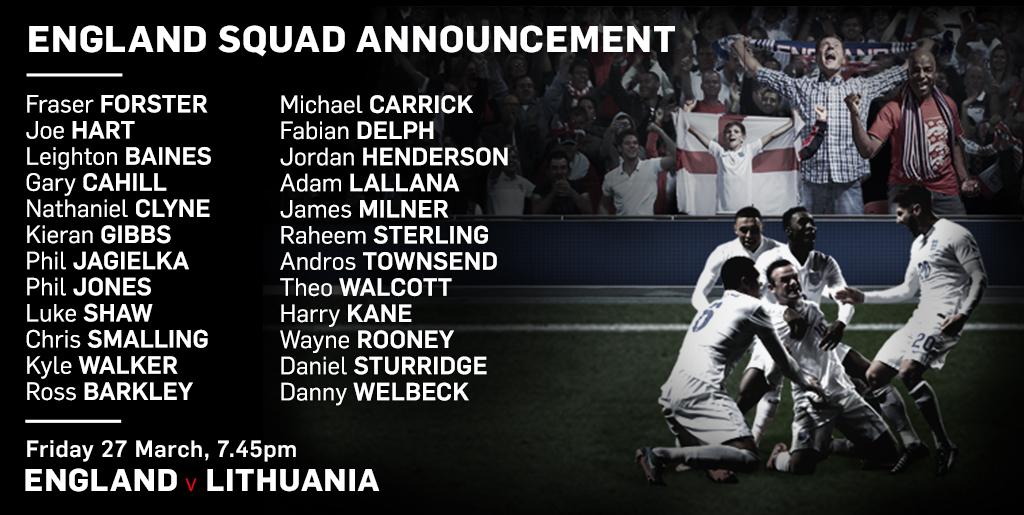