The January transfer window is now closed but that won’t stop the newspapers from speculating ahead of the summer so we’ll bring you all the news and gossip. Today, Man Utd are linked with Real Madrid’s Fabio Coentrao…. 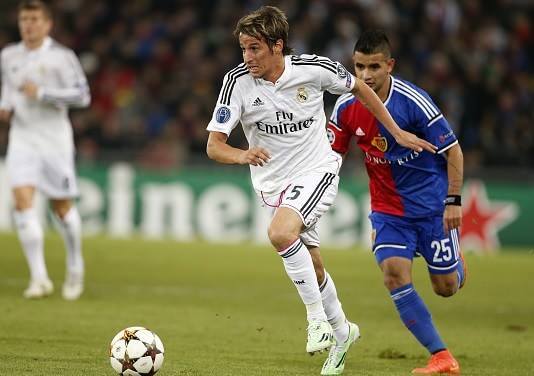 Manchester United are ready to renew their interest in Real Madrid defender Fabio Coentrao and the player has confirmed he’s interested in making the move to Old Trafford, according to reports.

Coentrao has been at the Bernabeu for over three-and-a-half years following his move from Benfica in 2011 but he’s failed to hold down a place in Carlo Ancelotti’s starting eleven with the Italian coach preferring Marcelo in the left-back role.

The 27-year-old has hinted he’ll consider his future at Madrid at the end of the season as he may be forced to leave in search of regular first team football and he’s long been linked with a move to the Premier League.

Reports have suggested that the Portuguese international came close to joining Manchester United on loan last summer and it appears Louis van Gaal is ready to renew his interest at the end of the season.

The Express cite reports coming out of Spain that claim the United boss wants additional cover at left-back due to Luke Shaw’s persistent injury problems and is ready to offer Coentrao a fresh start here in England.

The report comes as Coentrao has fuelled speculation over a possible move to Old Trafford after telling reporters that United are one of the best clubs in the world and he’d be honoured to play for the 20-time Premier League champions.

“I already showed that interest in playing there (at Manchester United).

“It’s one of the best clubs in the world, a club that I admire a lot. It would be an honour to play there.” Coentrao is quoted as saying by the Express

So the player is clearly happy to be linked with a move to United and some may even call this a ‘come and get me plea’ by the out-of-favour full-back.

He may not be a regular at Madrid but he’d certainly be a useful addition for United and offer a real threat to Shaw’s starting position in van Gaal’s line-up.

As long as United can agree a deal with the Spanish giants, it doesn’t sound like Coentrao will take much persuading to make the move, so this is one potential deal we should keep a close eye on over the coming weeks.