Chelsea and Manchester United have joined a growing list of top clubs who are tracking Augsburg defender Abdul Rahman Raba, according to reports.

As the opening of the summer transfer window approaches, managers are working hard identifying targets and lining-up potential deals so we’ll bring you all the news and gossip. Today, Chelsea and Man Utd are linked with Abdul Rahman Baba…. 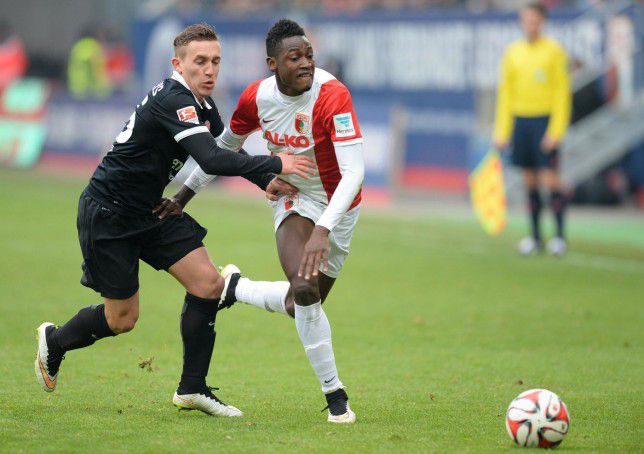 Chelsea and Manchester United have joined a growing list of top clubs who are tracking Augsburg defender Abdul Rahman Raba, according to reports.

The Ghanaian international only moved to Augsburg last summer from German second division side Greuther Furth following the clubs promotion to the Bundesliga.

Baba has enjoyed an excellent debut season in Germany’s top flight and his impressive form has helped Augsburg climb to the heady-heights of sixth in the table.

The full-back has attracted interest from some of Europe’s top clubs with reports suggesting that the likes of Real Madrid, Borussia Dortmund, Atletico Madrid and Schalke are all keeping a close eye on his situation.

However, it seems there is now interest form the Premier League too as the Daily Star are citing reports from German newspaper Bild who claim that Chelsea and Manchester United have now joined the chase for Baba’s signature this summer.

The 20-year-old’s representative Sascha Empacher recently welcomed interest from Madrid but insists they have yet to enter formal talks with the Spanish giants.

“The fact that Baba has been linked with Real Madrid is, of course, a great honour. His achievements have brought him to the attention of the world’s best clubs. But we do not negotiate with Real.” Empacher is quoted as saying by the Daily Star

Baba is a specialist left-back and has scored four goals in his 19 league appearances so far this campaign while he was also part of the Ghana side that lost out to Ivory Coast in the final of the 2014 African Cup of Nations.

His rapid rise up the ranks has been catching the eye of many top clubs and it seems like Augsburg will have a tough time keeping hold of him this summer, with Chelsea and United now among those understood to be keen.

Jose Mourinho could be on the look-out for another left-back with Filipe Luis constantly linked with a move back to Spain while Louis van Gaal is also tipped to bring in another option on the left side of his defence with Luke Shaw struggling for form and fitness this season.

Baba would be a bold signing due to his lack of experience at the highest level but he certainly sounds like an exciting talent who could have a bright future, so perhaps he’s worth the risk.