Chelsea midfielder Cesc Fabregas appears in good spirits despite heading to Italy to undergo an operation to fix the broken nose he suffered against Stoke. 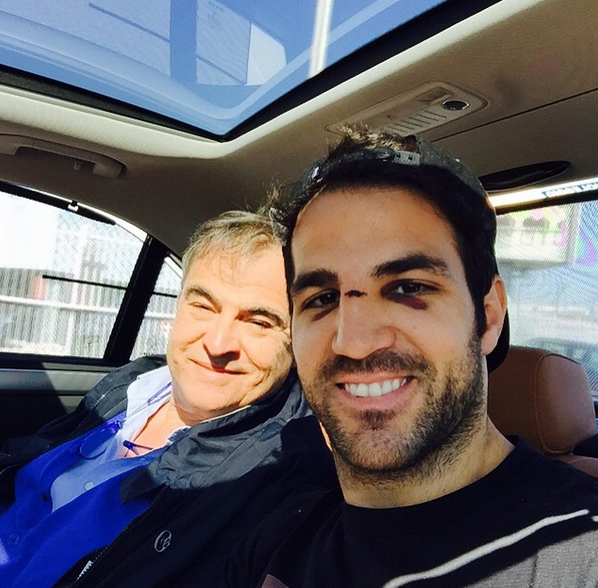 Chelsea midfielder Cesc Fabregas appears in good spirits despite heading to Italy to undergo an operation to fix the broken nose he suffered following a clash with Charlie Adam on Saturday.

The Stoke bruiser caught Fabregas with an arm to the face during the second half of Chelsea’s 2-1 victory at Stamford Bridge on Saturday evening, resulting in the Blues No.4 suffering a broken nose.

The Spanish midfielder has now taken to Instagram to upload a photo of himself sporting two nasty black eyes and a cut across the bridge of his swollen nose.

Despite the injuries, Fabregas was still all-smiles and the photo was accompanied with a message saying ‘Italy with Dr Paco‘ – which appears to confirm the midfielder has flown out to Italy to undergo an operation to fix his broken nose.

It’s the second time Fabregas has suffered this injury having broken his nose while playing for Spain in 2008, and the player said after the game at the weekend that the silver lining was he could now finally fix his nose having decided against surgery seven years ago.

Chelsea will now hope the operation goes smoothly and Fabregas will make a swift return to action. The Blues face an important month that sees them travel to local rivals QPR on Sunday before taking on Manchester United and Arsenal, so Jose Mourinho will want his playmaker fully-fit as they look to wrap up the title.