Liverpool have been handed an injury blow with Adam Lallana set to miss tonight’s FA Cup quarter final replay at Blackburn Rovers, according to reports. 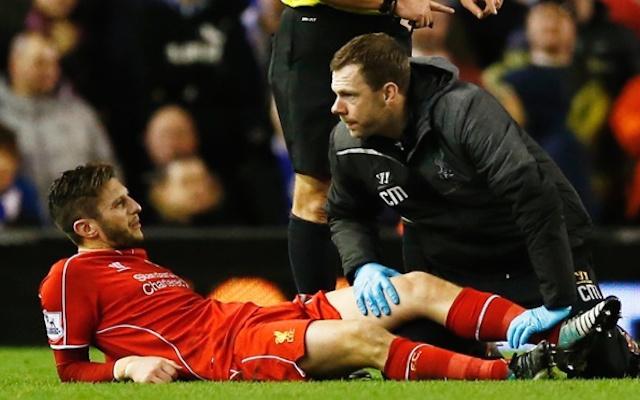 Liverpool have been handed an injury blow with Adam Lallana set to miss tonight’s FA Cup quarter final replay at Blackburn Rovers, according to reports.

Lallana picked up a groin injury during Liverpool’s 2-1 defeat to Manchester United last month and was subsequently ruled out of England’s international double-header against Lithuania and Italy.

The midfielder had initially hoped to recover in time to face Arsenal last weekend but wasn’t included in the squad that lost 4-1 at the Emirates Stadium on Saturday afternoon.

There were hopes the 26-year-old would be passed fit for tonight’s trip to Ewood Park, however, the Mirror claim that Lallana has still not been able to prove his fitness after failing to train on Tuesday and will once again miss out.

It caps off a frustrating first season at Anfield for Lallana following his big-money move from Southampton last summer, as he’s been hampered by various niggles since damaging knee ligaments in pre-season training.

Without Lallana’s services, Brendan Rodgers is going to have to make-do with the squad that lost at Arsenal – although Mario Balotelli could be back in contention after ruling himself out of the Gunners clash with a minor knee problem.

Rodgers has problems at the back as Emre Can is suspended following his dismissal at the Emirates so he joins Martin Skrtel in missing the game, while Steven Gerrard serves the second of his three-game ban.

Liverpool go into tonight’s match hoping to keep their season alive as the FA Cup has added importance following recent losses against United and Arsenal – which leave the Merseysiders with a mountain to climb in order to finish in the top four.