As the opening of the summer transfer window approaches, managers are working hard identifying targets and lining-up potential deals so we’ll bring you all the news and gossip. Today, Manchester City midfielder James Milner favours a move to Arsenal…. 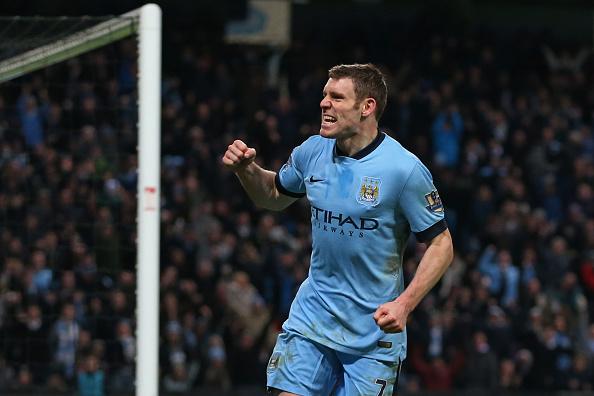 James Milner is ready to snub interest from Liverpool and join Arsenal on a free transfer when his Manchester City contract expires at the end of the season, according to reports today.

Milner has been with City since joining the club from Aston Villa in a £26 million deal in 2010 and although he hasn’t always been considered a first team regular at the Etihad, he has developed into one of the most hard working utility players in the Premier League.

However, the 29-year-old’s contract is set to expire in June and reports suggest he’s already rejected City’s latest offer of a three-year deal worth around £80,000-a-week.

With City so far unable to agree fresh terms or offer him the guarantees over playing time he’s looking for, Milner is expected to walk away from the club at the end of the season.

Several clubs are interested with Arsenal and Liverpool among those reportedly keen but the Independent claim that Milner is ready to snub a move to Anfield as he’s chosen the Emirates as his preferred destination.

It remains to be seen how much truth there is behind these reports but Milner would be a useful signing for the Gunners if they do manage to pull it off.

Arsene Wenger is expected to bring in at least one central midfielder this summer with the futures of Mikel Arteta, Mathieu Flamini and Abou Diaby all uncertain and Milner would bring some experience to the North Londoners squad.

The England international is also capable of playing out on the wing or even at right-back so he’d give Wenger plenty of options, but central midfield is believed to be Milner’s preferred position.

We’ll have to wait and see how this develops and there is still time for the likes of Liverpool to change him mind, but as it stands it appears Milner could be heading to Arsenal on a free transfer at the end of the season.